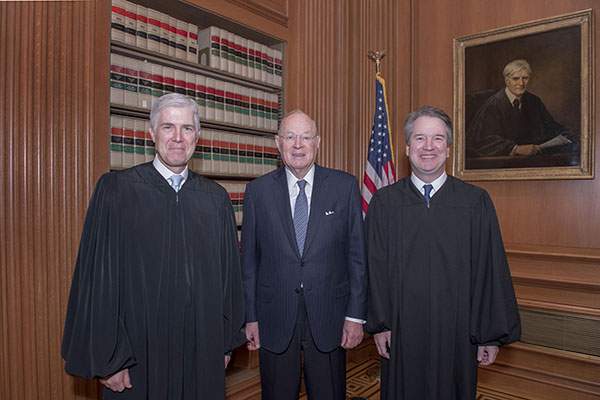 June 9 Update: Polling by the Southern Law Poverty Center shows that a “distressingly” large number of young, male Democrats, like the one who was arrested Wednesday near Justice Kavanaugh’s home, support assassinating politicians. The poll states, “Young Democratic men were the most agreeable to the idea, with 44% saying they could countenance such an assassination. Younger Republican women ranked second, with 40% approving of the idea. Older folks — defined as those 50 and older — were not fans of assassination, no matter their party or gender.”

Nicholas John Roske was arrested near Kavanaugh’s home carrying a gun, knife, some pepper spray, zip ties, a crow bar and a hammer. He was wearing shoes with padding on the outside in order to not be heard once he broke into the judge’s Maryland home. According to documents submitted by the prosecutor, Roske “stated that he began thinking about how to give his life a purpose.”

Meanwhile, in the House, Nancy Pelosi doubled down on not passing the Senate’s bipartisan bill to protect the Supreme Court. Asked about the assassination plot, Pelosi said, “Justices are protected…There will be a bill, but nobody is in danger over the weekend over our not having a bill.”

CompassCare, a Christ-centered organization dedicated to erasing the need for abortion, said it sustained heavy damage to its building. The abortion terrorist group Jane’s Revenge took credit for the attack, spray painting their signature “Jane Was Here” on the side of the structure.” This is at least the third attack by the group over the past month or so.

In May, the Department of Homeland Security warned that such leftwing violence, spurred by the Supreme Court potentially saying laws passed by legislatures should govern abortion, would rise throughout the summer. They warned that these groups would likely target “government, religious, and reproductive health care personnel and facilities and ideological opponents.”

It turns out the DHS was not overstating its concern. Karol Markowicz first revealed that a man from California carrying a gun was arrested Tuesday night near the home of Justice Brett Kavanaugh in Maryland. Law enforcement officials took him into custody after he told officers that he planned to assassinate the Supreme Court Justice.

The Washington Post is saying more about the potential assassin, who was allegedly carrying burglary tools in order to break into the judge’s house. “The man, described as being in his mid-20s, was found to be carrying at least one weapon and burglary tools, these people said, speaking on the condition of anonymity to discuss an ongoing investigation. Police were apparently notified that the person might pose a threat to the justice, but it was not immediately clear who provided the initial tip, these people said. The man apparently did not make it onto Kavanaugh’s property in Montgomery County but was stopped on a nearby street, these people said.

Two people familiar with the investigation said the initial evidence indicates that the man was angry about the leaked draft of an opinion by the Supreme Court signaling that the court is preparing to overturn Roe. v. Wade, the 49-year-old decision that guaranteed the constitutional right to have an abortion. He was also angry over a recent spate of mass shootings, these people said.

The man was arrested at about 1:50 a.m. today, Supreme Court spokeswoman Patricia McCabe said in a statement.”

The Supreme Court recently announced that they were taking strong measures to uncover who leaked an unfinished, draft opinion regarding abortion that has undermined the security of the Court.

CNN immediately went to work trying to downplay the potential assassination attempt, something it is safe to assume they would likely only do if the assassin wanted to kill a “conservative” justice. The anchor, Whitney Wild, also laughably tried to blame “right wing extremism” for the incident, claiming “the risk truly comes from both sides of this abortion debate.”

Sure it does. Just last month Chicago Mayor Lori Lightfoot asked supporters on Twitter to “take up arms” against the Supreme Court. Although Mitch McConnell has never threatened leaders with whom he disagrees with violence, Chuck Schumer has. The Democratic leader targeted Justices Kavanaugh and Gorsuch during an unhinged rant about abortion. The current Majority Leader said, “I want to tell you Gorsuch, I want to tell you Kavanaugh: You have released the whirlwind, and you will pay the price. You won’t know what hit you.”

In the House, Democrats have actively worked to leave the Supreme Court vulnerable to the leftwing violence they helped to stir. Democrats placed a “poison pill” in a bill to aimed at adding to the security of the Court. Washington Free Beacon reported about the ploy in May, “The lack of urgency from House Democrats comes as leftwing protests have erupted outside the Supreme Court and the homes of conservative Justices Samuel Alito and Brett Kavanaugh in response to the leak of a draft opinion overturning Roe v. Wade. On Saturday, a pro-life clinic’s office was firebombed in Wisconsin. Those incidents, Republicans say, mean enhanced security is necessary as soon as possible before things escalate.”

Democrats in the House again blocked the security bill on Wednesday.

The Democrat in the White House has not been better on the topic, either. Rather than stand up for the rule of law and the safety of our legal system, the White House said, “I think the president’s view is that there’s a lot of passion, a lot of fear, a lot of sadness from many, many people across this country about what they saw in that leaked document. We obviously want people’s privacy to be respected.” Shortly after that statement, Justice Samuel Alito was placed in an “undisclosed location.”

Last week the president addressed the nation to pitch gun control, targeting the AR-15 assault rifle, often used in school shootings. That same week, however, he argued for restricting 9mm handguns, a popular self-defense weapon infrequently used in mass shootings. Why would anyone be surprised that ordinary Americans are skeptical of gun control?

According to the federal affidavit against the would be assassin, he “told the detective that he was upset about the leak of a recent Supreme Court draft decision regarding the right to abortion as well as the recent school shooting in Uvalde, Texas.”

The Silence is Violence crowd that makes up much of the mainstream media and other public liberals have almost completely ignored the assassination attempt against Kavanaugh and the firebombing in Western New York. The New York Times for example placed 16 stories above the Kavanagh plot.

Jonah Goldberg summed up the media bias succinctly: “Look. I’m on record rolling my eyes at a lot of “if this was so and so” stuff. But if they caught someone wanting to assassinate RBG if she were still alive or Sotomayor today because of their abortion/gun rights views, it would be the only story the media covered today.”