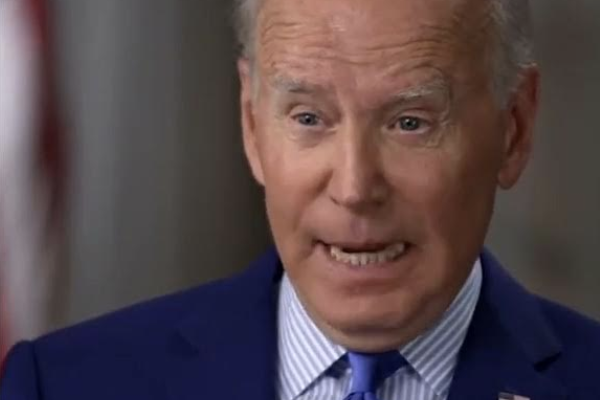 The warrant allowing for the search had been authorized by Attorney General Merrick Garland and approved by Magistrate Judge Bruce Reinhart, a former lawyer for Jeffrey Epstein and a strident defender of Lois Lerner using the IRS to attack conservative Tea Party groups during the Obama years.

The order stated that Trump was accused of violating the Espionage Act regarding unauthorized retention of national defense information, destroying or concealing records, and illegally removing or destroying federal government records.

The Washington Post reported, “Classified documents relating to nuclear weapons were among the items FBI agents sought in a search of former president Donald Trump’s Florida residence on Monday, according to people familiar with the investigation.”

In September 2022, President Biden said that he was shocked that a former top official could be so “irresponsible.”

One Twitter user collected a long line of receipts of liberals saying that what Trump did was one of the worst crimes against the United States ever.

Tbt to when Marc Elias said that Trump could be banned from the presidency because of classified docs at Mar-A-Lago, and MSNBC ate it up. (The tweet’s now deleted) pic.twitter.com/8JzNDzqCij

Like so many times before, it appears that something the Left claimed was one of the worst things to ever happen when they threw charges at Republicans was something they themselves were doing.

CBS writes, “The material was identified by personal attorneys for Mr. Biden on Nov. 2, just before the midterm elections, Richard Sauber, special counsel to the president confirmed. The documents were discovered when Mr. Biden’s personal attorneys “were packing files housed in a locked closet to prepare to vacate office space at the Penn Biden Center in Washington, D.C.,” Sauber said in a statement to CBS News. The documents were contained in a folder that was in a box with other unclassified papers, the sources said. The sources revealed neither what the documents contain nor their level of classification. A source familiar with the matter told CBS News the documents did not contain nuclear secrets.

Sauber also said that on the same day the material was discovered, Nov. 2, the White House counsel’s office notified the National Archives, which took possession of the materials the following morning.

Mr. Biden learned about the presence of the documents when his lawyer reported them to the White House counsel’s office in November. A source familiar said the president is unaware of their contents. The documents are believed to be currently held in a secure location in Washington.

The Presidential Records Act states that all presidential and vice-presidential material must be turned over to the National Archives after following special protocols to keep classified information safe. The finding occurred right before the midterm elections but was conveniently not disclosed until January after Democrats had won by campaigning against Trump, using the Mar-a-Lago raid as a cudgel against Republicans.

‘Among the items from Joe Biden’s time as vice president discovered in a private office last fall are 10 classified documents including US intelligence memos and briefing materials that covered topics including Ukraine, Iran and the United Kingdom, according to a source familiar with the matter,” according to CNN.

Update: Do you believe in coincidences? CNN reports that the material related to Ukraine … which is where Hunter Biden was cutting deals at the same time. https://t.co/LmSEMHmAkd

The BBC summarized Hunter’s connection with Ukraine following the smoking gun evidence from the Biden crown prince’s “laptop from Hell.” “The New York Post reported an email from April 2015, in which an adviser to Burisma, Vadym Pozharskyi, apparently thanked Hunter Biden for inviting him to meet his father in Washington.

Hunter was a director on the board of Burisma – a Ukrainian-owned private energy company while his father was the Obama administration’s pointman on US-Ukrainian relations. Hunter was one of several foreigners on its board.

The New York Post article did not provide evidence that the meeting had ever taken place. The Biden election campaign said there was no record of any such meeting on the former vice-president’s “official schedule” from the time.

But in a statement to Politico, the campaign also acknowledged that Mr Biden could have had an ‘informal interaction’ with the Burisma adviser that did not appear on his official schedule, though it said any such encounter would have been ‘cursory.'”

The Post story was initially censored on social media and mainstream outlets helped Biden label it “Russian disinformation.” After Biden became president and the election was behind them, the same media came clean and said that the laptop and the emails pointing to Biden’s involvement in Ukraine were genuine.

President Biden has shown unwavering loyalty to Ukraine since that country was invaded by Russia, sending over $100 billion in taxpayer money as aid to the ailing country.

Earlier in the week, CNN reported that the White House is taking it up a notch in the cold war against Russia. Ukrainian soldiers will soon be training in the United States.

The news channel wrote, “Ukrainian troops are set to begin training on the Patriot missile system in the United States as soon as next week, two US officials familiar with the matter tell CNN.

The training program will take place at Fort Sill in Oklahoma, where the US conducts its own training on operating and maintaining the advanced air defense system. Fort Sill is one of the Army’s four basic training locations and home to the service’s field artillery school, which has been training service members for more than a century.

The training for the Ukrainians on the complex system is expected to take “several months,” said Laura Cooper, the deputy assistant secretary of defense for Russia, Ukraine and Eurasia.

CNN first reported that the advanced air defense system would be provided, after months of denying the request due to the steep logistical and training challenges deploying it. However, a senior administration official told CNN last month that the “reality of what is going on” in Ukraine ultimately pushed them to provide the system.”

Needless to say, Republicans, now in control of the House, will want to see what documents related to Ukraine Biden took after he left as vice president. American intelligence agencies have already stated that they believe Hunter Biden could be a security risk to the nation, and they’re not alone. Republican James Comer had stated he intends to investigate Hunter’s shady connections once he gets his committee gavel. During an interview, the Kentucky Congressman said, “There are decisions that Joe Biden’s making every day in this White House that are questionable, that go against what I think the majority of Americans would expect from the White House, and yet, these decisions are made in my opinion, because he was compromised by his son’s shady business dealings”

As Republicans in the House start sending out subpoenas, expect Democrats to all of sudden scream that congressional hearings are antidemocratic, unjust fishing expeditions, but they’re probably about to find out that what’s good for the goose is good for the gander.

Despite Frequently Posting Videos of Her Using Them, AOC Calls For Ban Of Gas Stoves