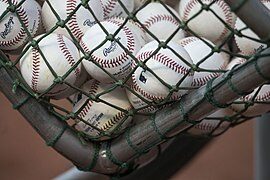 Any sports fan has seen the speech. James Earl Jones standing in a farm field, wearing his old-fashioned flat cap:

They’ll come to Iowa for reasons they can’t even fathom. They’ll turn up your driveway, not knowing for sure why they’re doing it. They’ll arrive at your door as innocent as children, longing for the past….And they’ll walk out to the bleachers, and sit in shirt-sleeves on a perfect afternoon. They’ll find they have reserved seats somewhere along one of the baselines, where they sat when they were children and cheered their heroes. And they’ll watch the game, and it’ll be as if they’d dipped themselves in magic waters. The memories will be so thick, they’ll have to brush them away from their faces.”

The speech from Field of Dreams is so iconic because it touches on something that most Americans, at some point or another, has experienced. What Jones says is true: “The one constant through all the years, Ray, has been baseball. America has rolled by like an army of steamrollers. It’s been erased like a blackboard, rebuilt, and erased again. But baseball has marked the time.

This field, this game — it’s a part of our past, Ray. It reminds us of all that once was good, and it could be again.”

Baseball means a lot to a lot of people all over our country. It’s an American institution, but like many other institutions these days, baseball appears to have been infiltrated and captured by the Left as it attempts to reshape our society in its own image.

That’s why your favorite baseball team may likely be funding organizations that believe children should have irreversible sex change operations.

The National Review writes, “Under the auspices of LGBT-themed “Pride Nights” — fundraisers and charity partnerships that began in the early 2000s and were embraced, over the course of two decades, by almost every team in the league — many of MLB’s most prominent franchises have begun to promote or fund groups that encourage or provide sex-change procedures and gender-transition hormone treatment for minors as young as 12. Other organizations promote “social transitions” — i.e., nonmedical changes in “gender expression,” including the adoption of new names, pronouns, and clothing — for children as young as three.

In May, I reported that the Detroit Tigers’ Pride Night, which took place during a June 1 game against the Minnesota Twins, was funneling money to groups that were actively promoting transgender identification — even medical transitions — for children. At the checkout page for tickets to the Pride Night game, the Tigers website offered “a chance to support a local Pride organization of your choice,” with a drop-down menu that included LGBT-focused clinics such as the Ruth Ellis Center and Corktown Health, both of which perform medical gender transitions on minors. On top of masculinizing and feminizing drugs, at least one — the Ruth Ellis Center — included irreversible “gender affirming surgery” in its suite of “transition care for transgender youth” options. Another charity promoted by the Tigers, the Trans Sistas of Color Project, was actively funding groups such as “Trans Minors Rights,” which “advocates for empowering transgender youth to make their own decisions regarding puberty blockers” — i.e., “without requiring the consent of a parent.” (The group’s tagline: “Unblock blockers.”)

The article has a list of teams and the organizations they support at the end of the article.

This isn’t the only left-leaning culture war issue that Major League Baseball has decided to fight. In 2021, after Democrats, including President Biden, mischaracterized Georgia’s voting law reforms as “worse than Jim Crow,” a claim that anyone who isn’t a hardcore partisan could see was ridiculous, MLB stripped Atlanta of the 2021 All Star Game. The league moved the game to Colorado, which has more stringent laws about voting than Georgia.

More recently, Major League Baseball has decided that gun ownership should be targeted, blaming guns for police failing to protect a school. Parroting liberal talking points, “The Tampa Bay Rays and the New York Yankees baseball teams took the unusual step…of turning their Twitter accounts over to disseminating facts about gun violence in the wake of the recent mass shootings in Buffalo and Uvalde, Texas,” The New York Times wrote.

“Instead of flashing information about pitching performances or the latest home run distances, both teams’ Twitter feeds presented facts about gun violence during the course of their game in St. Petersburg, Fla.

Rays communications staff members led the effort to research and vet the facts, an initiative assisted by Jason Zillo, the Yankees’ vice president of communications, who was in St. Petersburg for the four-game series, along with other members of the Yankees’ communications team. Each fact was followed by a citation.

“There are things that are bigger than baseball,” Zillo told the newspaper. “It’s good that we can use our platform to share facts that are important to everyone, no matter whom you root for, or whether you are a sports fan at all.'”

The Tampa Bay Rays also announced a $50,000 donation to Everytown for Gun Safety, the most prominent pro-gun control organization in the country, which gave millions of dollars to Democratic campaigns in Florida.

Not even a day at the ballpark can go without being politicized, so long as liberals believe it helps their cause.

He remarked that the same thing always happens. Leftwing activists:

4. wear its carcass as a skin suit, while demanding respect.

At least one leader has said enough is enough and shown leadership. In response to the Rays actions, Governor Ron DeSantis made his own move. Telling reporters that it would be “inappropriate to subsidize political activism of a private corporation,” the Republican vetoed $35 million in state funding to the Rays meant to “fund a sports training and youth tournament complex in Pasco County in the Tampa Bay area. The hope was to make this facility the new player development facility for the Rays.”

Joe Biden Might Live There, But Elizabeth Warren Runs The White House