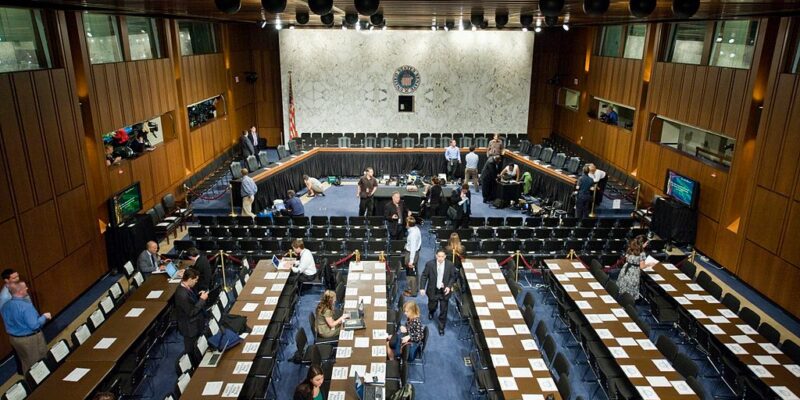 [Architect of the Capitol, Public domain, via Wikimedia Commons]

The low-rated, liberal obsession of DC recently had its series finale. On Monday, the Democratic-led January 6 Committee in the House of Representatives released its final report, and unsurprisingly, it laid into former President Donald Trump. After a long investigation, the committee alleges that Trump violated several laws and has recommended to the Department of Justice that Trump be charged with crimes stemming from the mobbing of the United States Capitol at the beginning of 2021.

The AP reported, “As they cap one of the most exhaustive and aggressive congressional probes in memory, the panel’s seven Democrats and two Republicans are recommending criminal charges against Trump and associates who helped him launch a multifaceted pressure campaign to try to overturn his 2020 election loss. The panel also released a lengthy summary of its final report, with findings that Trump engaged in a “multi-part conspiracy” to overturn the election.

The committee alleged violations of four criminal statutes by Trump, in both the run-up to the riot and during the insurrection itself, as it recommended the former president for prosecution to the Justice Department. The charges recommended by the committee are conspiracy to defraud the United States, obstruction of an official proceeding of Congress, conspiracy to make a false statement and aiding an insurrection.

Chairman Bennie Thompson, D-Miss., said the criminal justice system can provide accountability, adding, ‘We have every confidence that the work of this committee will help provide a roadmap to justice.’

Thompson said Trump “broke the faith” that people have when they cast ballots in a democracy. “He lost the 2020 election and knew it,’ Thompson said. ‘But he chose to try to stay in office through a multi-part scheme to overturn the results and block the transfer of power.'”

ABC noted, “In a sweeping 160-page summary released by the committee to explain its findings, the committee labeled Trump as the ‘central cause’ of the attack.

‘That evidence has led to an overriding and straight-forward conclusion: the central cause of January 6th was one man, former President Donald Trump, who many others followed. None of the events of January 6th would have happened without him,’ the summary said.”

Although the recommendation from the committee to prosecute Trump is symbolic, the finale revealed some rather embarrassing new information and testimony from some of his advisors that will almost certainly hurt him in 2024.

Hope Hicks, a very close and influential advisor in the Trump White House, testified that she worried about what the former president was saying in the aftermath of the 2020 election. Hicks claimed she felt concern that Trump was tarnishing a positive legacy by acting like a sore loser.

Hope Hicks: "I was becoming increasingly concerned that we were damaging his legacy."

Q: "What did the president say in response to what you just described?"

Hicks: "Nobody will care about my legacy if I lose. So, that won't matter. The only thing that matters is winning." pic.twitter.com/sfJQz8yUvx

The Washington Examiner noted, “The testimony from Hicks was used by the committee as an example of aides and officials around Trump telling him there were not levels of voter fraud prevalent enough to overturn the results of the election.

‘I was becoming increasingly concerned that we were damaging his legacy,” Hicks said of the refusal by Trump’s team to concede the election.

Hicks left the White House staff a week before the end of Trump’s term, with officials saying at the time it was a previously arranged exit and not a resignation sparked by the Capitol riot on Jan. 6, 2021.'”

The committee didn’t just focus on Trump. “The Jan. 6 panel also issued a criminal referral to the Department of Justice for conservative attorney John Eastman, who the committee says was the architect of the scheme to pressure then-Vice President Mike Pence to reject states’ electoral votes on Jan. 6 and have fake electors submitted to the Congress instead.

And it referred four Republican members of Congress to the House Ethics Committee for defying subpoenas from the committee earlier this year, including House Minority Leader and potential incoming Speaker Kevin McCarthy, R-Calif. The others are: Reps. Jim Jordan, R-Ohio, who is expected to be the next chairman of the House Judiciary Committee, Andy Biggs, R-Ariz., and Scott Perry, R-Pa,” NBC wrote.

While everyone else will be frantically shopping to make sure they have their Christmases in order, it’s likely going to be a long week for the former president. Along with the January 6 Committee’s big reveal, “on Tuesday, the House Ways and Means Committee will meet privately to discuss what to do with the six years of Mr. Trump’s tax returns that it finally obtained after nearly four years of legal efforts by Mr. Trump to block their release.

The committee could release them publicly, which would most likely be done in the final days of Democratic control of Congress.

And on Wednesday, the Jan. 6 committee is expected to release its report on the attack, along with some transcripts of interviews with witnesses.

Taken together, this week will point a spotlight on both Mr. Trump’s refusal to cede power and the issue that he has most acutely guarded for decades, the actual size of his personal wealth and his sources of income,” said DNYUZ.

In 2021, Trump became the first president in history to be impeached twice. Now he’s also the only president to be formally referred by Congress for potential criminal prosecution. It is still unclear whether the DOJ will follow the congressional recommendation.

In November, Donald Trump announced he was running for president again in 2024. Last week he made a “MAJOR ANNOUNCEMENT” that he was selling trading cards with a picture of him dressed up like an astronaut on them.

Recent polling has shown that the former president has lost his touch with most Republicans. USA Today reported, “By 2-1, GOP and GOP-leaning voters now say they want Trump’s policies but a different standard-bearer to carry them. While 31% want the former president to run, 61% prefer some other Republican nominee who would continue the policies Trump has pursued.

They have a name in mind: Two-thirds of Republicans and those inclined to vote Republican want Florida Gov. Ron DeSantis to run for president. By double digits, 56% to 33%, they prefer DeSantis over Trump.”