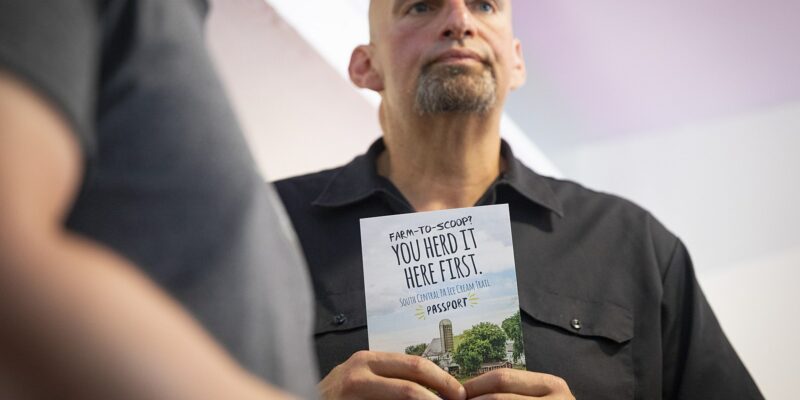 In July, The Washington Post reported disturbing details about the Democratic Senate Candidate in Pennsylvania John Fetterman’s health. The newspaper writes, “Fetterman…has been recovering from a stroke since mid-May. The Democrat has struggled to regain the ability to speak fluidly but is expected to resume campaign events in the coming weeks.”

Last night Fettmeran met Republican Mehmet Oz on the debate stage and it became quickly revealed how the Democrat’s campaign had been hiding his difficulties. It’s clear that Fetterman’s campaign staff and wife have decided to humiliate a sick man and potentially impede his recovery rather risk running someone else for the seat.

It was apparent that Fetterman was struggling cognitively from the start of the debate, when he opened by saying, “Hi. Goodnight, everybody.”

He continued on, fumbling a question about fracking in which he said he simultaneously said he supported and did not support fracking, seeming confused.

Fetterman is asked about previously saying he wanted to eliminate fracking:

But what may have proven that the PA Democrat had more than just “speech problems” was when he started screaming during Oz’s closing statement:

The New York Post offered a thorough summation of the distasteful scene. “Democrat John Fetterman stammered through his first and only debate with Republican Dr. Mehmet Oz before the Nov. 8 Senate election in Pennsylvania, repeatedly struggling to give coherent answers to key questions.

Fetterman’s lingering “auditory processing issues” following his May stroke were readily apparent during the Harrisburg showdown, where despite debating with the aid of two 70-inch TV monitors equipped with closed captioning — spelling out the moderators’ questions, and Oz’s responses — it was very unclear what the Keystone State’s lieutenant governor was trying to say at times.

However, when debate co-moderator and local news anchor Dennis Owens twice asked Fetterman if he would release his medical records “in the interest of transparency,” the Democrat refused to be pinned down on the question and said that his doctors believe he is fit to serve.

“For me, transparency is about showing up,” Fetterman said in his dodge.

Before the debate, reporter Dasha Burns announced that Fetterman needed closed captioning to understand questions and struggled during small talk.

NBC reporter says she found it was "difficult" for Fetterman to engage in "small talk" without use of a closed captioning system.

"Our team was the first to be in the room with Fetterman for an interview rather than via remote video conference." pic.twitter.com/8rtj2zLj4M

After revealing what we now know was the truth, she was immediately attacked by Fetterman’s wife and the media. She demanded that Burns receive “retraining.” The Washington Times reported, “The pointed questions left Gisele Fetterman in a “rage,” she said Friday. Fetterman accused Burns of doing a “disservice” to journalism for the “appalling” report. “It was appalling to the entire disability community and I think to journalism,” Fetterman said.

The spin from the left as they see a Senate seat slipping away has been a sickening display of exploiting the disabled. Democrats charged anyone who offered criticism that Fetterman should be spending time in recovery rather than in the Senate with “ableism.”

A taste of the heartlessness that liberals on Twitter shared last night as they outed themselves as only caring about winning a Senate seat at all costs, calling criticism of running an obviously sick man “ableism.”The editor at large for Philadelphia Magazine:

Let's be very clear, the ableism from the right will not stop thousands of Pennsylvanians from voting for John Fetterman on November 8th.

One televised debate will not stop people from remembering how Dr. Oz has lied, misled, and belittled everyday people. #PASenateDebate

Dr Oz just gave a masterclass on how to bully people with disabilities https://t.co/FA4AlG1rRa

i personally think that fetterman speaking with a disability is less painful and off-putting to watch than oz’s cruel and smirking jabs at fetterman’s stroke https://t.co/yFJhozofWY

Axios quoted a Democratic official from Pennsylvania who said that Oz shouldn’t even be allowed to campaign because of Fetterman’s stroke: “I wished Fetterman was in a better place to clap back. Overall, I argue it wasn’t great for us but still a draw. Remember in these next few weeks that Oz’s campaign is spending tens of millions of dollars against a man with a major medical condition.”

What’s remarkable about this kind of spin is that it doesn’t even realize that it’s merely exploiting the disabled by using them as a shield. T. Becket Adams pointed out how disgusting this kind of rhetoric really is:

If they can’t see they’ve chosen politics over this man’s health and recovery, they’re practically lost. If they *do* see it and simply don’t care, they’re in need of help no earthly source can provide. pic.twitter.com/lDU1KKQRjw

Over at National Review, Jeff Blehar offered a point of view from someone who has helped family members recover: “Like many of you, I watched last night’s Pennsylvania Senate debate between John Fetterman and Mehmet Oz with something akin to slack-jawed horror. Fetterman’s manifest inability to deal with the contradictions and inconvenient past positions in his record is one (political) matter; his manifest inability to process simple verbal exchanges or respond in complete and coherent sentences is something else entirely.

I rewatched the debate this morning, and my feelings turned from shock to anger. I understand that John Fetterman has his own agency and personal ambitions, but I am stunned, given how feeble he is right now, that anyone who loves him or cares for him would have allowed him to continue on this campaign. He desperately needs to be working on rehabilitation as a full-time endeavor, seven days a week. I understand the reality that Democrats want to retain the U.S. Senate just as much as Republicans wish to retake it, but at some point you have to find a new candidate. And now, I suspect, Pennsylvania Democrats are about to pay for their cynicism.”

The entire Fetterman debacle offers further evidence that while Democrats run as compassionate defenders of the public when push comes to shove, they’ll do anything, even manipulate the disabled, to gain power.

As Red Wave Approaches, Dems Back Away From Ending Filibuster, Call For Foreign Monitors of Election