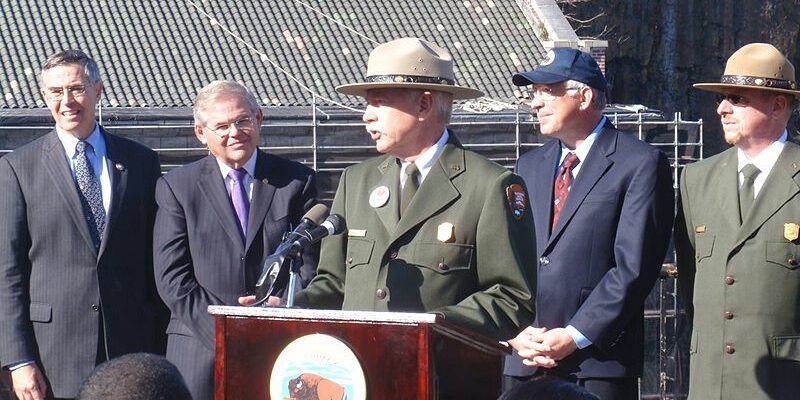 [PatersonGreatFalls -A Visual Reference for Teacher from Paterson, USA, CC BY 2.0, via Wikimedia Commons]

Senator Robert Menendez, a Democrat from New Jersey, has been up to his old tricks again and is facing a new federal investigation, according to reporter Kadia Goba.

Menendez is currently one of the most powerful Democrats in the Senate as the chairman of the Senate Foreign Relations Committee. His office told USA Today, “Senator Menendez is aware of an investigation that was reported on today, however he does not know the scope of the investigation,” Michael Soliman said in a written statement. “As always, should any official inquiries be made, the Senator is available to provide any assistance that is requested of him or his office.”

The news outlet Semafor reports, “Prosecutors in the Southern District of New York have contacted people connected to Menendez in recent weeks, the sources said. They have sent at least one subpoena in the case, according to a person connected to the inquiry.

Menendez and a Florida eye doctor, Salomon Melgen, were indicted in 2015 for an alleged arrangement under which the doctor provided flights on a private jet and lavish vacations in exchange for the senator’s help with government contracts and other public favors. Menendez’s lawyers argued that the two men were simply good friends. The inquiry ended in a mistrial in 2017 after the jury failed to reach a verdict. (Melgen was convicted in 2017 of medicare fraud, and received clemency from President Donald Trump in 2021.)”

The previous charges, according to reports, revolved around the senator allegedly trying to obtain “visas so foreign girlfriends of Melgen, a married eye doctor from Florida, could visit him; challenging Medicare officials about a regulation tied to allegations Melgen overbilled the government by $9 million; and seeking to get the government to put pressure on the Dominican government about a contract to screen outbound cargo held by a company Melgen owned.”

A spokesman for the Southern District of New York, Nicholas Biase, declined to comment on the inquiry.”

NBC News New York writes, “Menendez was a political prodigy who first won a school board seat at 20 years old. He was subsequently elected mayor of Union City, to the state Assembly and Senate, and later to the U.S. House of Representatives, where he spent more than a decade. In 2006 he was appointed to the U.S. Senate after Jon Corzine resigned to become governor. He was elected to a full term later that year, and re-elected in 2012 and 2018.

Shortly after the government dropped its case, the Senate Ethics Committee’ severely admonished‘ Menendez, said he had broken the body’s rules and ordered him to repay gifts he’d received.

The scandal did little to dent his popularity…[he] regained the chairmanship of the Senate Foreign Relations Committee, and his son Rob is currently running for Congress in New Jersey’s 8th District, a race the younger Menendez is expected to win easily.”

Just as Democrats have used actual disabled people to shield their Democratic nominee for the Senate in Pennsylvania, party leaders had no problem supporting Menendez when he faced a tough re-election campaign.

After his mistrial, Menendez lined up a who’s who of Democrats to support him. The New York Times wrote at the time, “The people lining the rows in front of the stage at the rally, in the town where he began his political career, were a who’s who of New Jersey Democratic politics: Senator Cory Booker, Gov. Philip D. Murphy, Brian P. Stack, the mayor of Union City, and John Currie, the state party chairman.

‘I asked the question this morning, Where would we be without Bob Menendez?’ Mr. Murphy said.

While none of the speakers made explicit reference to Mr. Menendez’s legal battle, a common theme emerged: that the senator was, and always has been, “a fighter.”

Senator Booker has yet to be asked if he still stands by the endorsement or if he was willing to give more details about what exactly Menendez has been fighting for.

Menendez recently made waves by going after Saudi Arabia. Politico noted, “A top Democratic senator is vowing to block all future weapons sales to Saudi Arabia and urging the Biden administration to “immediately freeze all aspects” of U.S. cooperation with the kingdom in response to its decision to cut oil production amid a global energy crisis set off by Russia’s war in Ukraine.

The message from Senate Foreign Relations Chair Bob Menendez (D-N.J.), who has veto power over foreign arms sales, comes amid the West’s outrage at OPEC+ for slashing its oil output — a move that the U.S. and other allied governments saw as a gift to Moscow as it suffers significant losses on the battlefield in Ukraine.”

The White House had previously asked the Sauds to lower gas prices right before the midterms to help stem the rising tide against the Democrats, but were rebuffed by the Middle Eastern oil kingdom.

Like Biden, Menendez only wants oil from other nations. He introduced legislation in 2021 to ban offshore drilling for oil.