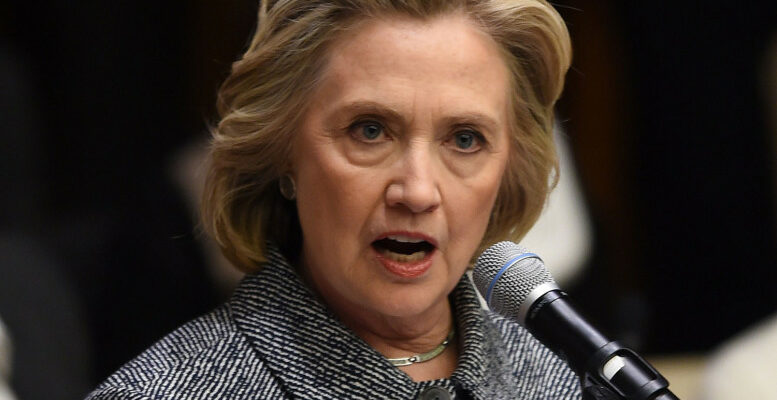 Hillary Clinton is upset. She’s upset she lost the presidency to Barack Obama, the first African American president. She’s upset she lost a gimme-election to Donald Trump after failing to campaign in Wisconsin. She has struggled to cope with these losses, the latter of which sent her wandering in the woods, trying to clear her mind.

The former Secretary of State has been unable to come to grips that she lost the presidency twice. She’s so deranged that she even believes the hoax that her own campaign came up with. During her book tour, selling a book called What If, which imagined if she was president, she claimed the 2016 election was “stolen” from her.

The National Review documented her obsession with Russia. She told a podcast, “There was a widespread understanding that this election [in 2016] was not on the level. We still don’t know what really happened…. There’s just a lot that I think will be revealed. History will discover.”

The overturning of Roe v Wade seems to have finally broken Hillary completely. On national television, she launched a racist, vile attack not against the author of the ruling, Justice Samuel Alito, but against Justice Clarence Thomas, the second African American to ever serve on the Supreme Court.

“He’s been a person of grievance for as long as I’ve known him,” she said on “CBS Mornings.” “Resentment, grievance, anger. And he has signaled in the past to lower courts, to state legislatures, find cases, pass laws, get them up. I may not win the first, the second, or the third time, but we’re going to keep at it.”

Clinton told host Gayle King that Thomas is speaking to the “right-wing” legislatures and justices with his rhetoric. In his opinion concurring with the majority that overturned Roe v. Wade last week, Thomas wrote that past Supreme Court decisions affirming the rights to same-sex marriage and married couples using contraception should be revisited, due to their similar legal bases to Roe.

One commentator noted the blatant hypocrisy: “So they’ve settled on the “angry black man” and it’s totally fine to do this on national tv.”

Clarence Thomas has lived a remarkable life. During an interview, he once contrasted his life with that of his grandfather. The Daily Signal wrote, “Asked about his personal tribulations, Thomas shrugged and explained the contrast between his life and that of his grandfather. ‘How can I complain to him — no education, no father, raised in part by a freed slave in the Jim Crow South? He never complained. My grandmother never complained. How can I tell him that as a member of the United States Supreme Court I can complain? I have every reason to be happy, none to be sad.'”

Justice Sonia Sotomayor recently described the kind of man Clarence Thomas is. She told a the American Constitutional Society, “I suspect that I have probably disagreed with him more than any other justice. That we have not joined each other’s opinions more than anybody else. And, yet, Justice Thomas is the one justice in the building that literally knows every employee’s name, every one of them. And not only does he know their names, he remembers their families’ names and histories. He is the first one who will go up to someone when you’re walking with him and say, ‘Is your son okay? How’s your daughter doing in college?’ He’s the first one that, when my stepfather died, sent me flowers in Florida. He is a man who cares deeply about the court as an institution, and about people.”

She added that while the two have a different vision for how to help people, they both share a “common understanding about people and kindness. That’s why I can be friends with him and still continue our daily battle over our differences of opinions in cases,” she said.

Does this sound like a man motivated by “grievance?”

Justice Thomas has been the target of racist attacks throughout this term of the Court. The Washington Times noted, “The slurs included the n-word, ‘house n——r,’ ‘coon,’ ‘slave’ and ‘Uncle Tom.’ Over the weekend, ‘Uncle Clarence,’ a spin on the derogatory term ‘Uncle Tom,’ trended on Twitter after it was used by actor Samuel L. Jackson….Users of other accounts threatened to ‘kill’ or “assassinate’ Justice Thomas, one of six justices who made up the majority in Friday’s decision striking down the 1973 Roe v. Wade decision that legalized abortion nationwide.”

Twitter has still left many of the racist threats up, though it’s been reported that Clarence Thomas simply doesn’t care. He presumably has better things to worry about.

We should also not be surprised by Hillary’s racist attack on Thomas. This is not the first time the Clintons have used race-based inferences in politics. During a 1996 speech about crime, Hillary said that African American kids “are often the kinds of kids that are called ‘super-predators.’ No conscience, no empathy. We can talk about why they ended up that way, but first we have to bring them to heel.”

In 2007 during a campaign stop in Selma, Alabama, she used a “black accent” when speaking to a predominantly African American crowd as she recited a poem.

In 2017, as she defended her 2008 and 2016 campaigns, “Clinton told an audience Obama’s historic election victory was because he’s “attractive, good looking man.” Though, in that circumstance, she may have just been following Joe Biden’s lead after he called the 42nd president the “first mainstream African-American who is articulate and bright and clean and a nice-looking guy.”

Bill also got on the racist attack bandwagon. During the 2008 primary campaign, he “allegedly made a racially insensitive remark to Senator Ted Kennedy as he tried to convince the liberal to endorse his wife, Hillary Clinton.” He reportedly told the former Massachusetts senator, “A few years ago, this guy would have been carrying our bags.” The former president was reported to have said, “Obama doesn’t know how to be president.”

In 2012, the 41st president said that Obama “doesn’t know how the world works” and urged his wife to take the 2012 nomination from him, convening a meeting of advisors to build a strategy.

Of course, there was also the birther conspiracy that Hillary’s supporters helped push. The LA Times noted that “Jim Asher, formerly the investigative editor in the Washington bureau of the McClatchy newspaper chain, tweeted Thursday that a former longtime aide to Hillary and Bill Clinton had “told me in person #Obama born in #kenya,” he set off yet another in the seemingly endless side debates over who is to blame for which seamy aspect of contemporary politics.”

Hillary may have launched her vile attack against Thomas because she is preparing to run for president in 2024. Democrat Juan Williams recently wrote, “Clinton is exactly the right person to put steel in the Democrats’ spine and bring attention to the reality that ‘ultra-MAGA’ Republicans, as President Biden calls them, are tearing apart the nation.”

CNN Politics expert Chris Cillizza analyzed the rumors that Clinton may run again. “While I find it utterly implausible that Clinton would run against Biden in a primary in 2024,” he wrote, “I also think that an open nomination — if Biden takes a pass on running — would be something that would be hard for Clinton to not at least look at. That’s not to say she would run. It’s only to say that her name would get bandied about if the seat was open. That’s a lock.”

For her part, Clinton has said another campaign was “out of the question.”