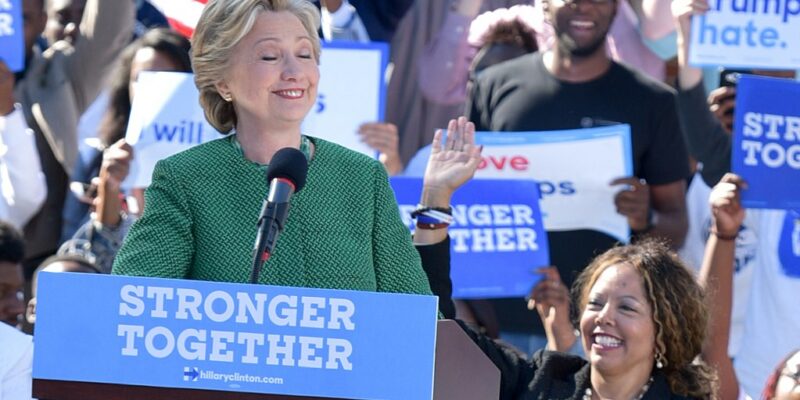 May 20 Update: CNN is reporting some surprising news from the trial of the Clinton Campaign lawyer Michael Sussman’s trial for lying to the FBI. It is now evident that Hillary Clinton personally approved her campaign’s desperate plan in fall 2016 to share fake news about an uncorroborated alleged server backchannel between Donald Trump and a major Russian financial institution.

Former campaign manager Robby Mook testified under oath that “he attended a meeting with other senior campaign officials where they learned about strange cyberactivity that suggested a relationship between the Trump Organization and Alfa Bank, which is based in Moscow. The group decided to share the information with a reporter, and Mook subsequently ran that decision by Clinton herself.” ‘We discussed it with Hillary,” Mook said, later adding that “she agreed with the decision.'”
The news that Hillary herself was aware that she was spreading unconfirmed rumors makes her 2020 comments even sadder. She told The Atlantic’s politics podcast, The Ticket in 2020. “We still don’t know what really happened….I really did feel sometimes like the tree falling in the forest. I believed he was a puppet of Putin. I believed that there was relevant, important information in his tax returns. I believed he did not have the temperament to be president, he was unfit—not a partisan comment, but an assessment of him.”

The trial of Hillary Clinton’s 2016 campaign lawyer Michael Sussmann begins this week as Special Counsel John Durham’s investigation into the origins of the F.B.I.’s likely corrupt probe into Donald Trump’s connections to Russia finally goes to court. Durham has charged Sussmann with lying to the F.B.I. but the Clinton crony has pleaded not guilty. Liberals have been obsessed with the 45th president’s alleged ties to the Kremlin since before he entered the White House. Some make every effort they can muster to mention it.

Much of the so-called “Russian Hoax” was designed as disinformation to help Hillary Clinton’s supporters salve their wounds by embarrassing the man who beat her. They needed to convince themselves that Hillary didn’t blow it, but rather some nefarious actors “stole” the election from her, something the current White House Press Secretary still believes, along with Hillary herself.

In 2019. the president asked Durham to investigate the hoax that led to the appointment of Robert Mueller as special counsel and the first impeachment by Democrats of Donald Trump. Mueller did not bring charges against Trump.

The fake “Steele Dossier,” which the Wall Street Journal noted, “proceeded to rivet the U.S. political class, win credibility within the Federal Bureau of Investigation, cast a shadow over the first two years of the Trump presidency and cost millions of dollars for investigations and lawsuits, only to eventually be mostly discredited.

One reason was where much of the dossier’s information came from—anything but Kremlin insiders. Instead, a Wall Street Journal review found, many of the dossier’s key details originated with a few people gossiping after they had been brought together over a minor corporate publicity contract.” Sussman is alleged to have gone to the F.B.I. to serve as a fake source for the dossier and convince them that Trump was associated with Russia.

The New York Times summarized the case against the Clinton lawyer, “The trial centers on whether Michael Sussmann, a cybersecurity lawyer with ties to Democrats, lied to the F.B.I. in September 2016, when he relayed suspicions about possible cyberconnections between Mr. Trump and Russia. The F.B.I. looked into the matter, which involved a server for the Kremlin-linked Alfa Bank, and decided it was unsubstantiated.

In setting up the meeting, Mr. Sussmann had told an F.B.I. official that he was not acting on behalf of any client. Prosecutors contend he concealed that a technology executive and the Hillary Clinton campaign were his clients to make the allegations seem more credible.

Mr. Durham has used it to release large amounts of information to insinuate that there was a broad conspiracy involving the Clinton campaign to essentially frame Mr. Trump for colluding with Russia.

That insinuation also hangs over the other case Mr. Durham has developed, which is set to go to trial later this year. It accuses a researcher for the so-called Steele dossier — a since-discredited compendium of opposition research about purported links between Mr. Trump and Russia — of lying to the F.B.I. about some of his sources.”

Chicago Mayor Calls For ‘Taking Up Arms’ Against SCOTUS