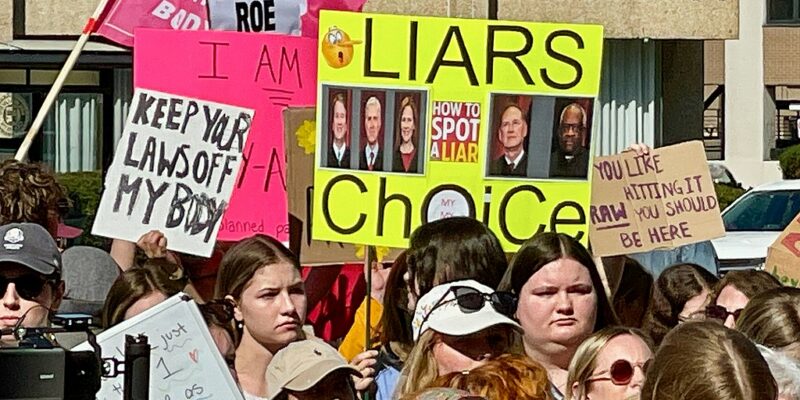 As expected, the Supreme Court voted to overturn Roe v Wade, returning the decision to regulate abortion to the states where elected officials can write any laws they like on the matter. Written by Justice Alito, the majority opinion of the Court stated, “The Constitution does not prohibit the citizens of each State from regulating or prohibiting abortion. Roe and Casey arrogated that authority. We now overrule those decisions and return that authority to the people and their elected representatives.”

The last part is the most important. The Court has returned power to the people, something you’d think those who have spent the last two years yelling “our democracy is at stake!” would support. But, as also expected, especially from the antics of Keith Olbermann and others yesterday, this wasn’t the case.

Democracy for Democrats, apparently, only matters when it’s validating things they want. Raise the potential that they might have to bring something in front of the voters, negotiating something the people support, like say a 15 week abortion ban, and all of a sudden the Court, and the democracy it protects, is “illegitimate.”

Fox News broke down the reactions from Democrats in the aftermath of Dobbs. Democrats lashed out Friday following the Supreme Court’s historic ruling to overturn Roe vs. Wade with chairman of the Democratic National Committee (DNC) calling the high court “illegitimate.”

In response to a tweet by South Carolina Republican Sen. Lindsey Graham championing the Friday ruling as a “long overdue” decision Jamie Harrison, a South Carolina native, issued a scathing retort. “It isn’t up to you, this illegitimate court, or a bunch of state elected officials to decide what happens to a woman’s body… that choice belongs to a woman and no one else! Period!!!” the DNC chairman said.

His sentiments were echoed by March For Our Lives, a student-led group that supports gun control legislation, said they were “appalled” by the Supreme Court’s decision to overturn 50 years of abortion rights.

“It’s clear to us that the Court is more interested in scoring political points that protecting the rights enshrined to us in the Constitution,” the group said in a statement. “We are watching the erosion of rights promised to us long before we were born by an unelected, unaccountable, undemocratic Court packed with illegitimate judges forced through by a president who lost the popular vote.”

New York Democrat Rep. Alexandria Ocasio-Cortez also reportedly joined protestors in front of the Supreme Court Friday to chant, “This decision is illegitimate” according to posts on Twitter.

Democratic supporters were even more outrageous. The Capitol Police had to deploy riot police almost immediately after the ruling as crowds gathered in front of the Court. Previously, radical pro-choice groups called for a “night of rage” if Roe were overturned. A group of protestors burned an American flag while others shouted that they wanted to burn down the Supreme Court.

As protests began to erupt across the country, protestors planned to “carpool” to Justice Clarence Thomas’s house. The flyer, which zoomed across Twitter, said: “Protesters headed to Justice Clarence Thomas’ house on Friday night in the wake of the Supreme Court overturning the landmark abortion-rights decision Roe v. Wade. Enraged? Devastated? Pissed the f-ck off? So are we,” before listing the address of the Thomases [Here at NCP we don’t publish people’s addresses, so we are not linking the tweet, you’ll have to trust us].

The protest went to the Thomas home just weeks after authorities stopped an assassin in front of Justice Brett Kavanaugh’s home a few weeks ago. It didn’t occur that sending an angry mob to the front yard of the only Black Supreme Court Justice to rule on the case might not be a great look.

Threats to churches and pro-life organizations have also risen over the past few months. Fox News recently noted that there have been roughly “40 incidents of violence against pro-life supporters since the Supreme Court abortion case leak.”

Woke corporations also got in on the act, as well. The clothing company Patagonia released a statement saying that they would pay bail for any employee arrested for protesting “for reproductive justice.”

According to CBS News the CEO of Dick’s Sporting Goods announced that “company will provide employees across the U.S., who need to travel to a different state for abortion access, up to $4,000 in travel expense reimbursement, Hobart said in the post.”

Other Democrats wanted to make sure everyone kept their priorities straight. Colorado State House Candidate Elisabeth Epps wrote, “Please let’s be attentive with our language. The fall of Roe v Wade is not just about a “woman’s right to choose.” Women aren’t the only people who need abortions. As women, we lose nothing when we speak of pregnant *people.* But in doing so we gain inclusivity.”

This topic was so talked about on the left today that “assigned female at birth” became a “trending topic” on Twitter.

The most ghastly response to the ruling came from Ana Navarro, essentially saying that handicapped people would be better off aborted. She told the CNN audience: “And because I have a family with a lot of special needs kids. I have a brother who’s 57, and has the mental and the motor skills of a one-year-old. And I know what that means financially, emotionally, physically, for a family, and I know not all families can do it,” she added.”

“And I have a step-granddaughter who was born with Downs syndrome, and you know what? It is very difficult in Florida to get services. It is not as easy as it sounds on paper and I’ve got another, another step-grandson who is very autistic, who has autism.”

Jeff Blehar, host of the podcast Political Beats, spoke for many of us shocked by Navarro’s cruelty and calls for violence against the most vulnerable, writing, “That Ana Navarro clip from CNN really is just the most inhumanly repulsive thing I’ve seen all day related to the abortion issue. I shouldn’t have watched it. She comes across as thinking special-needs children are little more than cumbersome houseplants all better off aborted.”

Other very online and paranoid liberals focused on “period apps,” suggesting that those apps would somehow help the government catch those who did illegal abortions or something.

Another self-described socialist Twitter user, confused about how federalism works, took things a bit further, writing, “what the f-ck is the federal government going to do when this patchwork mess of laws inevitably creates conflict between the states? when states refuse to extradite for felony miscarriage? when lawsuits over abortion bounties end up in federal court?”

Conservative commentator Allie Beth Stuckey how misguided these ideas are: “Miscarriage care and the removal of an ectopic pregnancy are not abortions,” she wrote. “When someone makes this claim, make them cite the exact line from the specific bill or law that forbids these procedures. They won’t, because they can’t.”

Most of these people want to imagine the worst-case scenario because it gives meaning to their lives to worry about something unlikely to happen, but that doesn’t mean elected leaders won’t spur that fear to benefit themselves.

Journalist Tom Elliot summarized the paranoia stemming from Democrats in the wake of the Dobbs ruling. He documented eight conspiracy theories that high-ranking officials “have recently predicted the following will be criminalized post-Roe:

The Supreme Court still has seven more cases to rule on over the coming weeks.