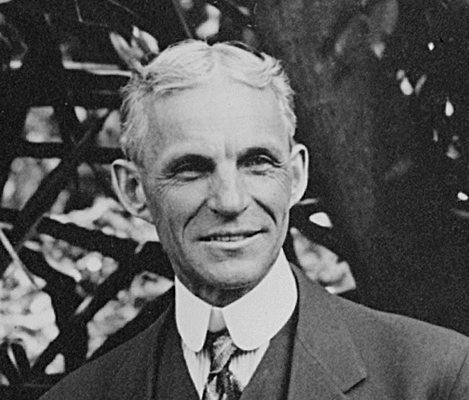 One of Henry Ford’s heirs is using his sway to attack a Catholic church in metropolitan Detroit because he wants abortion to be legal up until birth. The wealthy, liberal great-grandson of the founder of Ford Motor Company, Edsel Ford II, has complained that St Paul Catholic in Grosse Pointe Farms, Michigan, put up a sign pointing out that 64 million lives have been lost to abortion since Roe v Wade ruling in 1973.

Nothing is worse than a rich liberal with hurt feelings, especially if it’s an inconvenient truth messing up their wealthy aesthetic.

The Federalist reported, In a letter addressed to the Grosse Pointe city manager, which was also sent to the reverend of St. Paul on the Lake Catholic Church and the local newspapers, Edsel B. Ford II, the great-grandson of Henry Ford, condemned the memorial as a “blight” on the community.

“Once again, I am writing to you with dismay concerning St. Paul Catholic Church’s use of their front lawn on Lake Shore Road to place signs and crosses advocating their political/moral/ethical position against abortion,” Ford wrote, according to the Detroit Free Press on Sunday. “As one drives down Lake Shore Road, the view and expanse of yards in Grosse Pointe Farms has been a beautiful asset of our city which our community has taken great effort to protect. Signs and crosses such as those erected by St Paul Catholic Church diminish the character of our neighborhood and quality of life for residents and visitors.”

Ford wrote that unless the memorial was taken down, his family would “proceed to install sign(s) in our yard of the same dimension, expressing our own views.”

“Because of your current position as City Manager of the City of Grosse Pointe Farms, I assume you give special dispensation to St. Paul Catholic Church to display these controversial signs and crosses,” Ford said. “As a taxpayer I also have the right to express my concerns.”

Of course, the groveling city manager, Shane Reeside, asked How high? when a member of the Ford Family asked him to jump. He “said he came into work Monday and took immediate action to respond” to Ford’s whining.

“Our public service director will go out and review the signs that were placed out by the church to make sure they conform with the city sign ordinance,” Reeside told the local paper. “The signs are located in the community service district, so the sign requirements are a little bit more expansive than they are for the residential area. Schools, churches and libraries are zoned a little bit differently in terms of what the zoning standards are, than a residential home would typically allow. Political signs on front lawns are restricted in size not to exceed 6 square feet.”

St. Paul on the Lake uses signage “to state their position, obviously a pro-life position, of the Catholic Church” every election season.

Though the law is different for commercial and residential areas in the city, that did not stop the Fords from demanding that they receive special treatment. Cynthia Ford, Edsel’s wife, “told the Free Press on Monday, it seems unfair to a community that St. Paul on the Lake Catholic Church in Grosse Pointe Farms is allowed to put up political signs five times bigger than homeowners — including her — who live just a few doors down on the same Lake Shore Avenue.”

The newspaper continued: “Cynthia Ford sits on the board of directors of Planned Parenthood of Michigan and donated $100,000 in May to Reproductive Freedom for All, which worked to gather signatures to get Proposal 3 on the Michigan ballot this election cycle. Separate and apart from the abortion issue, she said she simply can’t figure out why taxpayers have less freedom to share their views than a nearby institution such as a church or school.

“I feel strongly,” she said. “My issues are pro-choice, equality and fairness.”

Cynthia and Edsel Ford are members of a local church that is not Catholic.”

Ah yes, the “I feel strongly” argument that unworking and ridiculous heirs like to make when pretending to know better than everyone else. I guess we should all be convinced and give them special privileges rather than following the law.

Michigan has become a flashpoint over abortion as of late. This November, voters will be deciding whether they should expand Michigan’s abortion laws, which currently allow for abortion prior to fetal viability. After viability, an abortion can only be performed to preserve the mother’s life.

Opponents of the proposal argue that it will allow abortion up until birth, citing broad reasoning that “threaten the life of the mother” such as anxiety.

No critic has been more vocal than the Catholic Church. The Detroit News wrote, “Catholic followers in the Archdiocese of Detroit marked Respect Life Month on Sunday with a sermon led by Archbishop Vigneron celebrating the ruling that overturned a national right to an abortion. Respect Life Month was established in the U.S. Catholic Church in 1972, months before the 1973 decision in Roe v. Wade, which legalized abortion nationwide. Sunday’s church service was one of two special Masses coordinated by the archdiocese this year.

At the Cathedral of the Most Blessed Sacrament on Woodward Avenue in Detroit, the archbishop called for congregants to vote against “Proposal 3’s ‘anything goes’ approach to abortion and a redoubling of efforts to support women, children and families in need.”

“The challenge that we face very directly in the election (Nov. 8), because then the citizens of Michigan will decide an issue of paramount importance in order to protect the inherent God-given dignity of all people,” Vigneron said. “God invites us to say ‘No,’ to Proposition 3. A proposition that would enshrine a radical anti-life regime in the Michigan Constitution.”

He called the proposal ‘dangerous’ and with ‘vast, extreme consequences’ because of its ‘vague wording would result in elimination of dozens of publicly supported laws,’ like those that prohibit taxpayer-funded abortion, parental consent of abortion procedures for minors and more.”

The archbishop authored la letter last month stating, “We are less than two months from the November 8 election, during which voters in Michigan will decide on an issue of paramount importance to protecting the inherent, God-given dignity of all people.

Abortion advocates under “Reproductive Freedom For All” seek to amend the state constitution to allow unregulated abortion on demand through all nine months of pregnancy. This effort, primarily funded by out-of-state dollars, is spearheaded by Planned Parenthood and the ACLU. It will appear on the ballot as Proposal 3.

The implications of this proposal are vast and extreme. If passed, the proposal’s vague wording would result in the elimination of dozens of Michigan laws relating to abortion, including: laws prohibiting partial-birth abortion and taxpayer-funded abortion; laws requiring parental consent and informed consent for abortion; laws protecting the conscience rights of persons who refuse to participate in abortion, and more. The proposal would prohibit lawsuits from being brought against any individual for performing an abortion, even when complications result from the procedure.

Proposal 3 is not about protecting existing rights, but rather about revoking the right to life for an untold number of human beings.

This is a grave offense to the dignity and sanctity of unborn, innocent human life.”

The archbishop is lucky that Edsel and Cynthia Ford wrote a letter to the city manager and not Merrick Garland. Otherwise, the SWAT Team might show up at St. Paul’s on the Lake.

Report: Hunter Biden On The Brink Of Being Charged