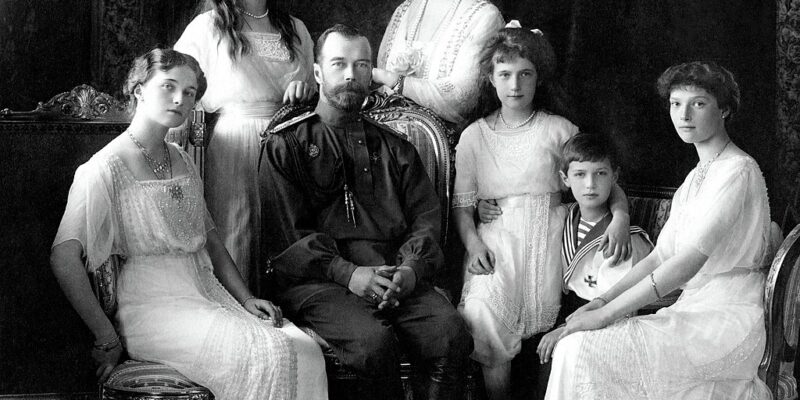 Russian Imperial Family in 1913 before they were murdered by revolutionaries. [Public domain]

At the risk of stating the obvious, Vladimir Putin’s invasion of Ukraine is not going well. When Russian forces crossed the border and started the war, the expectation was that he’d conquer his neighbor quickly, with minor complaints from a weakening West, and be welcomed as a liberator by Ukrainians from Odessa to Kyiv. One can almost see the Russian president sitting in the Kremlin, imagining himself walking triumphantly through the Ukrainian capital, showered with laurels among the throngs praising him.

In the words of Arrested Development’s Gob Bluth: He’s made a terrible mistake.

It turns out that Ukrainians like their country. They enjoy their independence, and while many have family ties in Russia, they have no interest in being conquered quietly. Saint Javelin has had her way with Russian forces so far. From the videos of Russian tanks on fire and bombers blowing up popping up all over the Internet, available via Elon Musk’s Starklink, President Zelensky is putting up a hell of a fight.

The AP reported that, according to British intelligence, “Russia’s invasion of Ukraine has largely stalled on all fronts, with Russian forces suffering heavy losses and making minimal progress on land, sea or air in recent days.” The West, for its part, doesn’t appear to be as weak-kneed as expected. Although President Biden bumbled delivering some Polish Migs to support Zelensky’s forces and dragged his feet to boycotting Russian oil, Ukraine’s western neighbors have risen to the challenge, taking in millions of refugees while supplying arms to keep the resistance going.

The worst appears yet to come from Putin’s confusion of Russia, which had a GDP the size of Texas before the war, with the former Russian Empire from 100 years ago. As has been noted, “even before the invasion, Russia’s economic capabilities were hardly capable of sustaining an empire. Now, with foreign sanctions presiding over a plummeting Russian ruble, Russia’s economic standing has fallen further still. If measured at today’s exchange rates, Russia’s economy would be the 22nd largest in the world, with a gross domestic product (GDP) not much larger than the state of Ohio’s.” How do you say “Mississippi, here we come!” in Russian?

No country has ever faced a “global freeze out.” Other experts have said, “Vladimir Putin’s war on Ukraine and the global response to it will drastically alter Russia’s economic future, setting the country back 30 years.” We all should wonder how poor Putin is willing to make his country in order to play czar for a day. From the looks of the hundreds of protests occurring throughout the former Soviet Empire, the Russian people are close to saying enough is enough. After all, things didn’t work out great for the Romanovs.