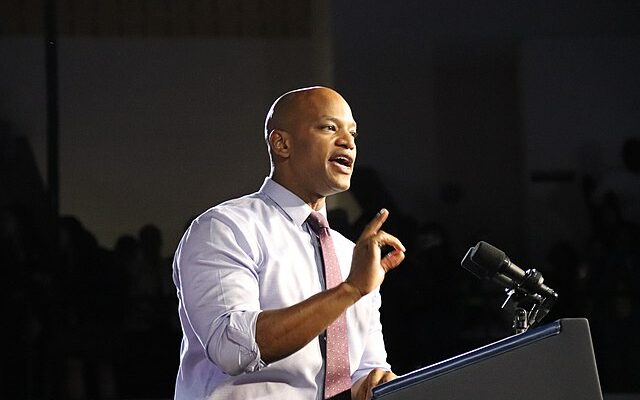 There’s a new face in the Democratic Party, and as President Biden remains mired in scandal, some influential commentators are wondering: could he run in 2024? On January 8, Wes Moore took the oath of office to be the new governor of Maryland.

The Washington Post wrote, “With his hand on a Bible once owned by abolitionist Frederick Douglass, Wes Moore was sworn in Wednesday to become Maryland’s first Black governor and only the third elected in U.S. history.

Moore, an author, combat veteran and former chief of a poverty-fighting nonprofit, took the oath of office at the State House in Annapolis, just blocks away from a dock where Africans, forced into the slave trade, arrived in America to be sold.

After the formal swearing in, Moore was introduced by Oprah Winfrey – who appeared to wipe tears from her eyes after the gun salute that followed Moore’s swearing in — to a crowd of roughly 5,000 people gathered in front of a building historians say was built with enslaved labor.

“I trust you,” Winfrey said turning to Moore. “I trust your leadership and I trust your vision and I want you to know you can trust it too.”

“Oprah, along with President Biden and former President Obama, endorsed Moore during his campaign. Although he has never held public office, Moore is a seasoned businessman and philanthropist who served as CEO of the Robin Hood Foundation, an organization focused on fighting poverty in New York City. While running for governor, Moore made that as well as protecting reproductive rights in Maryland two of his major issues, the billionaire talk show host’s website said.

“I know that, with Wes Moore as your governor, Maryland’s best days lie ahead,” Oprah said when introducing Moore at today’s inauguration. The state has a significant place in Oprah’s heart; she moved to Baltimore at just 22 years old to work as co-anchor of WJZ-TV’s 6 o’clock news. “When I moved to Maryland, I had no idea really who I was, or what an Oprah was,” she said during the inauguration speech. “But I will tell you something: Maryland is where I figured it out.”

Oprah continued her speech by saying that Maryland is full of opportunity, especially now that her preferred candidate was finally in charge. “I always walk away from our conversations with a new perspective…new ideas…a new way of seeing things…a new burst of positive energy,” Oprah said of her relationship with Moore.

Oprah Daily continued: “In addition to being a rising star of the Democratic party, a Rhodes scholar, and a combat veteran, Moore is a bestselling author. Oprah and Moore met when Oprah interviewed him about his first book, The Other Wes Moore, which was published in 2011 and follows two Wes Moores from Baltimore—the one who would become Maryland governor, and one who is serving a life sentence in prison. “I was so impressed then by his integrity, his wisdom,” Oprah said of that very first interview. “He knew who he was and had a vision for who he intended to be and how he wanted to serve.”

Winfrey’s endorsement has enormous implications for American politics. She first broke her ‘no politics’ pledge to help launch Obama to the White House. Some are wondering if she can do the same thing for Moore.

The Daily Caller noted, “Moore’s military service, success in the finance industry, fundraising successes and connections to career-making donors have captured the attention of the Democratic party, as has his apparent bipartisan appeal, according to Bloomberg. Moore’s campaign emphasized crime and the economy, talking points typically preferred by Republicans, while he has also attracted several high profile Democratic donors.

The new governor was raised in poverty and went on to serve as a U.S. Army captain and paratrooper in Afghanistan, according to Bloomberg. He was also a Rhodes scholar, a prestigious position also granted to former President Bill Clinton.

“I was like, ‘He’s giving Obama,’’ Chryl Laird, a University of Maryland political scientist, told Bloomberg. “He could have a good run at a time when the Democratic party has to be thinking about their young talent.”

“The son of a Jamaican immigrant, Moore ran on a pledge to ‘leave no one behind,’ campaigning on a set of progressive policies such as raising the minimum wage, increasing clean energy initiatives and reforming education and policing — many of which he touched on during his address. Marylanders have been offered a number of ‘false choices,’ Moore said, including the choice between ‘a competitive economy and an equitable one,’ and people “feeling safe in their own community and feeling safe in their own skin,’” according to Politico.

Moore crushed his Republican challenger Dan Cox by 33 percentage points during the 2022 election. He replaces popular Republican Governor Larry Hogan, who held the office for two terms. Like the Daily Caller, Politico noted, “Democrats were whispering of a potential future presidential run for Moore before the 44-year-old even won the election, likening the political newcomer to former President Barack Obama, who aided Moore on the campaign trail.”

Despite his recent success in the midterms and claims that he’s preparing to run for re-election, many Democrats seem to view Joe Biden as a placeholder president, often citing his age. He would be 82 on Inauguration Day 2025.

Another alternative may be to let Biden run for re-election but switch out Kamala Harris for Moore. Earlier in the month, we noted that supporters allegedly urged the president to drop the sitting vice president due to her “insecurities” causing “dysfunction” in the White House.

Can anyone find Chris Matthews? We need to know if he’s gotten a thrill up his leg yet.