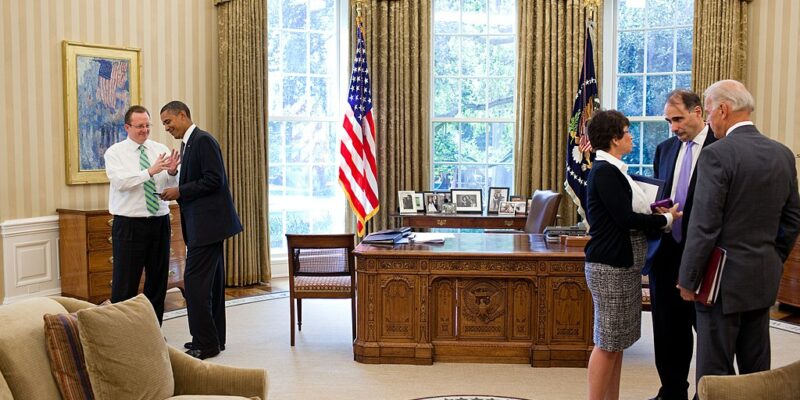 June 13 – Update: President Biden’s spokesperson has tried to quell rumors that the president will not seek re-election. White House Press Secretary Karine Jean-Pierre tweeted, “To be clear, as the President has said repeatedly, he plans to run in 2024.”

This did not seem convincing to many on the social media site. Wesley Yang, for example, wrote that he was”less confident this would happen than before I read” Jean-Pierre’s message.

Democrats have begun to panic about the unpopularity of President Joe Biden and have begun wondering about his fitness for a second term. DNYUZ writes, “Midway through the 2022 primary season, many Democratic lawmakers and party officials are venting their frustrations with President Biden’s struggle to advance the bulk of his agenda, doubting his ability to rescue the party from a predicted midterm trouncing and increasingly viewing him as an anchor that should be cut loose in 2024.”

During interviews with almost 50 Democratic leaders, from county leaders to members of Congress, as well as with disappointed voters who backed Mr. Biden in 2020,” The New York Times reports of a political party that believes its collapse is imminent with their current leader. Members feel “extraordinarily pessimistic” considering their future.

The story follows on the heels of a January 6 Committee hearing that did not gain the attention from voters many liberals expected. Moreover, leaks have begun coming out of the White House that the president is not respected by his staff and growing frustrated that so few people in Washington take him seriously. According to NBC News, the president has become unhappy about “a pattern that has developed inside the West Wing. He makes a clear and succinct statement — only to have aides rush to explain that he actually meant something else. The so-called clean-up campaign, he has told advisers, undermines him and smothers the authenticity that fueled his rise. Worse, it feeds a Republican talking point that he’s not fully in command.”

Joe Biden has one of the lowest approval ratings of any modern president, and few can see how he recovers politically. Just last week inflation hit the highest mark in over four decades, and baby formula still is hard to find in some places. Regarding the latter, the Washington Post remarked, “Corporate leaders knew in February that the formula industry faced a crisis. Biden says he wasn’t informed until April. The White House struggled to explain why.”

Much of the frustration may come from the growing number of “senior moments” that the elderly president seems to have. From calling the current governor of Michigan, Gretchen Whitmer, the wrong name to making incoherent rants about 9mm handguns, word has come out of the capital that the administration is “adrift.” Red State has collected some of the other times throughout his term that the 79-year-old president wasn’t just dealing with his stutter, an issue that has plagued him much of his life.

What used to be merely thought or discussed in private company is now being whispered by some Democrats is now being said out loud: Joe Biden is too old to be president and shouldn’t seek a second term. The Washington Examiner recently noted that “former Obama adviser David Axelrod raised a ‘major’ red flag regarding President Joe Biden’s ambitions to run for reelection in 2024, pointing to the commander in chief’s advanced age.

His comments appeared in a New York Times report Saturday that examined “whispers” among Democrats who are increasingly anxious about Biden’s leadership ahead of the 2022 midterm elections in which Republicans are widely expected to win back control of at least one chamber of Congress.

Biden, who is 79, is the oldest man ever to be president. In fact, Biden was older when he took the oath of office than was Ronald Reagan, the second-oldest sitting president ever, when he retired at 77. Biden would be 82 for a second inauguration.

‘The presidency is a monstrously taxing job, and the stark reality is the president would be closer to 90 than 80 at the end of a second term, and that would be a major issue,’ Axelrod said.”

For his part, Biden has said in direct terms that he expects to run in 2024, especially if the Republicans nominate Donald Trump. During an interview with ABC News, the president said, “Fate has intervened in my life many, many times. If I’m in the health I’m in now—if I’m in good health—then, in fact, I would run again.”

Two of the administration’s highest officials seem to be preparing for Biden to bow out. Vice President Kamala Harris recently took a fundraising trip to South Carolina, a critical primary state for Democrats seeking the White House and the state that launched Biden to securing the nomination in 2020.

The Washington Times has reported that Secretary of Transportation Pete Buttigieg is also gaining 2024 buzz. The newspaper writes, “Speculation over who is on deck starts with Ms. Harris. She has been a heartbeat away from the presidency for 14 months. But the poll numbers for Ms. Harris, the first female vice president, are worse than Mr. Biden’s.”

Trying to guess at potential Biden alternatives, political prognosticators have dropped the first black woman to be vice president behind the first openly-gay cabinet secretary on their 2024 scorecards. One such pundit, Aaron Blake from WaPo, commented: “Being vice president is certainly a good launchpad, but it’s not at all clear Harris has put it to good use. Her numbers are similar to Biden’s, and she’s done little to change the perceptions that harmed her 2020 campaign, including on her ability to drive a message. There’s also no way she would run against Biden if he does run (while others might have seen wiggle room on that). On the plus side, Biden has committed to her being his running mate again.”

Other Democratic names that often get mentioned for 2024 include Rep. Alexandria Ocasio-Cortez, who recently refused to endorse Biden for re-election, California Governor Gavin Newsom, and North Carolina Governor Roy Cooper.

Either way, Democrats seem to be in a bind. As one political writer put it for Politico: “As it stands, however, Democrats are staring at three root conditions:

House Democrats Wanted Super Bowl Numbers for the Jan. 6 Hearing, They Didn’t Get It