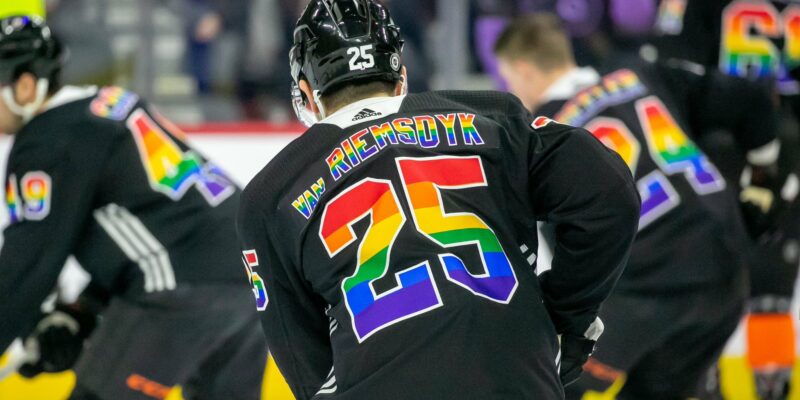 Hell hath no fury like a progressive scorned and nothing shows what “diversity” means quite like the total panic that happens every single time someone has the audacity to not partake in corporate virtue signaling. Earlier in the week, Philadelphia Flyer Ivan Provorov decided that he did not want to participate in wearing a “LGBTQ+ Pride Night” warmup jersey during his team’s pregame skate, citing his Russian Orthodox Christian faith.

The Washington Post wrote, “For the pregame skate, the Flyers wore Pride-themed jerseys displaying names and numbers in rainbow colors and wrapped their sticks in rainbow tape. The jerseys and sticks will be auctioned off, with proceeds going toward promoting diversity in hockey.”

The Daily Signal reported that “before the game, the Flyers hosted a ‘pregame skate for local LGBTQ+ youth and officers from the Greater Philadelphia G.O.A.L. organization.’ That organization advocates for “LGBTQ+ first responders and military members,’ aiming to ‘educate first responders in LGBTQ+ competency’ and ‘provide community outreach … between the LGBTQ+ public and first responder agencies.’

Before Provorov’s comments, the team released a statement expressing its support for “inclusivity” and for ‘the LGBTQ+ community,’ ESPN reported.

‘The Philadelphia Flyers organization is committed to inclusivity and is proud to support the LGBTQ+ community,’ the statement reads. ‘Many of our players are active in their support of local LGBTQ+ organizations, and we were proud to host our annual Pride Night again this year. The Flyers will continue to be strong advocates for inclusivity and the LGBTQ+ community.’

Provorov did not speak out against the gay pride event or condemn homosexuality. He merely chose not to participate in a pregame skate. He told the media, “I respect everyone. I respect everybody’s choices. But my choice is to stay true to myself and my religion. That’s all I’m going to say.”

#Flyers Ivan Provorov on his Pride Night pregame boycott :
“My choice is to stay true to myself and my religion.” pic.twitter.com/YSFKvkyEJC

His coach had his back. “While Flyers coach John Tortorella called the team’s Pride Night event “a great night,” he also defended Provorov’s refusal to participate,” wrote NBC.

The coach said he did not consider benching Provorov. The defenseman played a team-high 22 minutes and 45 seconds in Tuesday night’s game.

The repeaters in the media, however, wanted his head, however. The god of wokeness had been offended.

1. Ivan Provorov had the right to refuse to participate in the Pride Night activities in Philadelphia.

2. The Flyers should have responded by not allowing him to play in the game.

3. Freedom of expression doesn’t give you freedom from the consequences of your words or actions. https://t.co/9fdffAQk1N

But Provorov obviously does not respect “everyone”. If he did respect everyone, he would have taken part in warm-up and worn the Pride Night jersey. Don’t hide behind religion. https://t.co/Qk6dTgAnmP

One journalist even cried on air because the Flyers didn’t punish Provorov or force him to participate in a gay pride event, choosing instead to let him have his own opinion, even if, as an organization, it disagreed.

Philadelphia Inquirer columnist Marcus Hayes went after Provorov and Christianity, saying, “Why do you still believe that sexual orientation and gender identity is a choice? Do you also believe that the Earth is flat and that dinosaurs didn’t exist? Do you respect Vladimir Putin’s choice to attack a benign neighbor and kill 7,000-plus civilians to date?”

Again, Provorov is not a theologian or a politician; he’s a hockey player who has spent most of his life in the United States and merely did not want to participate in a gay pride event. He did not start World War III. He merely wanted to not do something.

Remember when liberal media members thought that athletes protesting, or at least not participating in things, was a great example of free speech?

While new NFL anthem policy makes sense from business & Trump PR perspective and is certainly within league’s rights, there’s just something that feels unAmerican about forcing folks to abide what is, well, the league’s own politics. Feels like a band aid that won’t stick.

Standing in the locker room where no one can see you is not protest. It’s erasure. The players cannot accept this.

Once again, for progressives freedom of speech is only the freedom to say, or in the case of Provorov, not say, things they agree with.

The hysterics in the media caused those on social media to compare the event to a “Seinfield” episode in which Kramer, while participating in an AIDS walk, refuses to wear the AIDS ribbon.

One can’t help but see the journalists losing their minds over a hockey player choosing his faith over a gay pride event and remember the famous example of “the greengrocer” in Victor Havel’s essay “The Power of the Powerless.”

Written in the late 1970s, the essay explains how under the communist regime in Czechoslovakia, there existed a ubiquitous pressure wielded by the political apparatus on culture to pressure citizens into compliance.

Havel’s writing brilliantly shows how the kind of cultural totalitarianism we often see today in the United States works. He used a store owner as an example:

The manager of a fruit-and-vegetable shop places in his window, among the onions and carrots, the slogan: “Workers of the world unite! Why does he do it? What is he trying to communicate to the world? Is he genuinely enthusiastic about the idea of unity among the workers of the world? Is his enthusiasm so great that he feels an irrepressible impulse to acquaint the public with his ideals? Has he really given more than a moments thought to how such a unification might occur and what it would mean?

I think it can safely be assumed that the overwhelming majority of shopkeepers never think about the slogans they put in their windows, nor do they use them to express their real opinions. That poster was delivered to our greengrocer from the enterprise headquarters along with the onions and carrots. He put them all into the window simply because it has been done that way for years, because everyone does it, and because that is the way it has to be.

If he were to refuse, there could be trouble. He could be reproached for not having the proper decoration in his window; someone might even accuse him of disloyalty. He does it because these things must be done if one is to get along in life. It is one of the thousands of details that guarantee him a relatively tranquil life “in harmony with society,” as they say.

Obviously, the greengrocer is indifferent to the semantic content of the slogan on exhibit; he does not put the slogan in his window from any personal desire to acquaint the public with the ideal it expresses. This, of course, does not mean that his action has no motive or significance at all, or that the slogan communicates nothing to anyone. The slogan is really a sign, and as such it contains a subliminal but very definite message. Verbally, it might be expressed this way: “I, the greengrocer XY, live here and I know what I must do. I behave in the manner expected of me. I can be depended upon and am beyond reproach. I am obedient and therefore I have the right to be left in peace.” This message, of course, has an addressee: it is directed above, to the greengrocer’s superior, and at the same time it is a shield that protects the greengrocer from potential informers. The slogans. real meaning, therefore, is rooted firmly in the greengrocers existence. It reflects his vital interests. But what are those vital interests?

Let us take note: if the greengrocer had been instructed to display the slogan “I am afraid and therefore unquestioningly obedient; he would not be nearly as indifferent to its semantics, even though the statement would reflect the truth. The greengrocer would be embarrassed and ashamed to put such an unequivocal statement of his own degradation in the shop window, and quite naturally so, for he is a human being and thus has a sense of his own dignity. To overcome this complication, his expression of loyalty must take the form of a sign which, at least on its textual surface, indicates a level of disinterested conviction. It must allow the greengrocer to say, “What’s wrong with the workers of the world uniting?” Thus the sign helps the greengrocer to conceal from himself the low foundations of his obedience, at the same time concealing the low foundations of power. It hides them behind the facade of something high. And that something is ideology.

The entire essay can be found here.

By rending their garments and demanding Provorov’s head rather than allowing him to disagree in silence, the liberal media is pointing to their “Workers of the World Unite!” sign in their window and saying, “I’m a good boy. Please leave me be.” At best they are hoping doing so will allow them to be left alone, at worst they’re exerting a fascistic instinct in the pursuit of domination over our lives.

Princeton professor Robert P. George explained the difference between tolerance and the current winner-take-all culture war being waged by the left:

Who’s ready for some cake?

The Next Obama? Some Dems Eye Newcomer for 2024