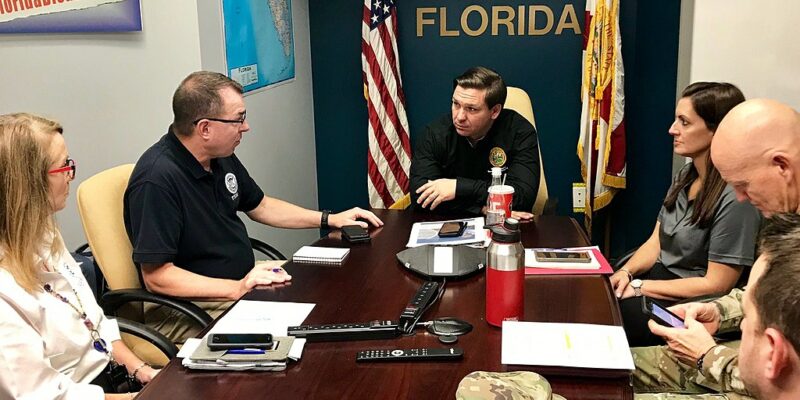 At this point, it shouldn’t be a surprise, but it should still be shocking how the media was rooting against Florida over the past week as Hurricane Ian battered the Sunshine state. The shameful attempt by journalists to turn a natural disaster into a political weapon can be defined by two words: Ron DeSantis.

The Florida governor has become Enemy Number 1 among the political class because he offers the biggest threat to Democrats maintaining the White House in 2024.

He also undercuts the media’s best money maker for the upcoming presidential contest, Donald Trump. One Twitter user noted: “The New York Times’s stock price rose ~350% under Donald Trump. As Les Moonves president of CBS said, Trump may be bad for democracy but he was great for corporate media.”

On Sunday, DeSantis gave an update to the dame caused by the hurricane as he spent time handing out food and studying the damage from Hurricane Ian.

In a press release, Governor DeSantis also highlighted relief efforts that directly aid Floridians, including the start of the fuel tax holiday, and promoted debris removal in communities where it is safe to do so. There are currently 42,000 linemen responding to the more than 840,000 reported power outages. They have already restored power to more than 1.8 million accounts across the state.

First Lady Casey DeSantis announced that the Florida Disaster Fund has raised over $21 million in the first 48 hours of activation. To read more info, click here. The Florida Disaster Fund is the State of Florida’s official private fund established to provide financial assistance to our communities as they respond to and recover from times of emergency or disaster. In partnership with public, private, and other non-governmental organizations, the Florida Disaster Fund supports response and recovery activities. To contribute, please visit www.FloridaDisasterFund.org or text DISASTER to 20222.

Florida authorities have distributed more than 829,000 MREs and 3.8 million bottles of water so far, as well.

The update comes as 76 Floridians have been confirmed dead and entire communities were completely destroyed after the massive storm surge and powerful winds of Ian hit over the weekend.

This number is significantly lower than what President Biden predicted. Following Hurricane Ian’s landfall, Biden issued his forecast: “This could be the deadliest hurricane in Florida’s history.” Issues and Insights noted, “The deadliest record was set in 1928, when the San Felipe-Okeechobee Hurricane landed near Palm Beach and some 2,500 people died, most of them from a 6-to 9-foot surge the hurricane caused in Lake Okeechobee. There were also hurricanes in the 1600s and 1700s that are believed to have killed more than 1,000 people in Florida.”

The news comes after “FEMA Administrator Deanne Criswell vowed that Hurricane Ian relief would be provided to ‘all communities’ after Vice President Kamala Harris said last week that the Biden administration would prioritize aid to minorities ‘based on equity,'” according to the Daily Wire.

This is false. @VP's rhetoric is causing undue panic and must be clarified. FEMA Individual Assistance is already available to all Floridians impacted by Hurricane Ian, regardless of race or background. If you need assistance visit https://t.co/x9X8AstnzL or call 1-800-621-3362. https://t.co/idsw1PX86x

The avoidance of worst-case scenarios hasn’t stopped liberal journalists from trying to turn this into DeSantis’s “Katrina,” however. For them, dead bodies are always helpful political tools.

Writing in The Hill, Joe Concha summed up the media’s depravity. “Here’s CNN reporter Steve Contorno: “As DeSantis prepares Floridians for Ian, he is urging residents to heed advice from the same local leaders he suggested they ignore during COVID and praising a federal agency he previously alleged withheld aid to the state [because] Biden was playing politics.”

Then there’s Politico, which reported that “DeSantis still hasn’t faced one of the toughest challenges a Florida leader can encounter: a major hurricane.” The problem is that a five-second check of Google finds this report to be completely false. Hurricane Sally devastated Northwest Florida along the panhandle in 2020, more than 18 months after DeSantis took office. Video of DeSantis speaking about and touring storm damage is readily available to anyone taking just a moment to search for it.

It’s fascinating how quickly horrific situations can be weaponized to advance a political narrative. During Katrina in 2005, the Democratic governor of Louisiana and Democratic mayor of New Orleans were largely exempt from any blame regarding evacuation efforts and preparation, such as not quickly calling in the National Guard, as only a governor can do. Instead, the finger was pointed squarely at President George W. Bush, a Republican, who certainly deserved some criticism but not the entirety of the blame.

Fast-forward to 2022: A Democratic president, Joe Biden, is in the White House; a Republican governor, DeSantis, is in charge of the state being hit. But it’s DeSantis who is the media’s focus — not the president, as was the case with Bush.”

New York Times journalist Maggie Haberman also tried to pin the deaths from the massive hurricane on Governor DeSantis, but was called out by conservative commentator Mollie Hemingway.

Warned my students last week that media would be making an attempt to "Katrina" Ron DeSantis … curious how much they'll put into this and how it will work out. https://t.co/C8xp9zwNhk

The most embarrassing smear attempt from the media came from CNN’s Nadia Romero. She tried to play “gotcha” with a governor in the middle of handling a crisis and got an answer she wasn’t expecting:

Despite efforts to smear him, the people of Florida stand with DeSantis.

🚨Lol. The bullshit media is going to lose their marbles over this video 👇🏻 pic.twitter.com/4e2Ryqosrp

A recent poll by Spectrum News/Siena College, showed Republican Ron DeSantis leading his Democratic opponent in this fall’s election by a 49% to 41% margin.