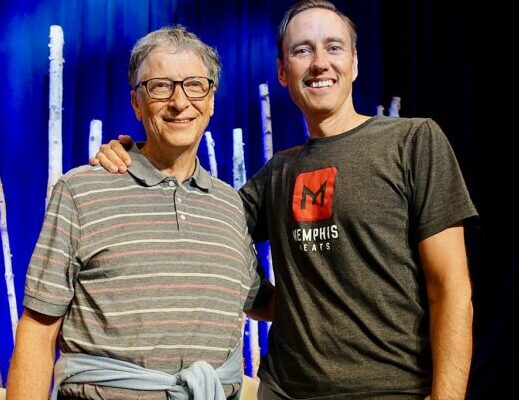 Billionaire Microsoft founder Bill Gates believes that your hamburgers and ribeyes are destroying the planet, and he really wants to do something about it.

During an interview with the MIT Technology Review, the cheeseburger-loving billionaire discussed his book, How to Avoid a Climate Disaster: The Solutions We Have and the Breakthroughs We Need, in which he lays out his vision for the future. His plans include what we peasants in “rich countries” are supposed to eat for protein.

Question: Do you think plant-based and lab-grown meats could be the full solution to the protein problem globally, even in poor nations? Or do you think it’s going to be some fraction because of the things you’re talking about, the cultural love of a hamburger and the way livestock is so central to economies around the world?

Answer: For Africa and other poor countries, we’ll have to use animal genetics to dramatically raise the amount of beef per emissions for them. Weirdly, the US livestock, because they’re so productive, the emissions per pound of beef are dramatically less than emissions per pound in Africa. And as part of the [Bill and Melinda Gates] Foundation’s work, we’re taking the benefit of the African livestock, which means they can survive in heat, and crossing in the monstrous productivity both on the meat side and the milk side of the elite US beef lines.

So no, I don’t think the poorest 80 countries will be eating synthetic meat. I do think all rich countries should move to 100% synthetic beef. You can get used to the taste difference, and the claim is they’re going to make it taste even better over time. Eventually, that green premium is modest enough that you can sort of change the [behavior of] people or use regulation to totally shift the demand.

So for meat in the middle-income-and-above countries, I do think it’s possible. But it’s one of those ones where, wow, you have to track it every year and see, and the politics [are challenging]. There are all these bills that say it’s got to be called, basically, lab garbage to be sold. They don’t want us to use the beef label.

Gates is right, of course, that the politics of forcing us to eat “meat” made from plant goop and fungi is unpopular. A poll in 2019 found that a majority of Americans rejected The Green New Deal, which included a plan to get rid of cows, or at least their farts.

He may have found a way around that, or at least Gates is doing his best to change public opinion. Over the past few years, The Bill and Melinda Gates Foundation has given money to The Atlantic to “To support content development and audience engagement related to innovations in K-12 and postsecondary education” and to the British newspaper The Guardian to “To support The Guardian to produce regular reporting on global health and development topics in its Global Development section.”

Did Bill Gates donate millions of dollars to these media outlets in order to get them to write stories about people no longer eating meat? An eagle-eyed Twitter user thinks he might have and has laid out the evidence.

The Guardian and The Atlantic would definitely be two publications you’d buy to help turn an unpopular idea into a popular one among the elite, well-to-do class who might be interested in tofu over some beef chuck. Both outlets shape the opinions of other journalists and sets the week’s media narratives.

Here is a sampling of stories published in the past few years that have pushed an anti-meat agenda.

The Atlantic, September 29, 2019. “Why The Impossible Burger Is Different” was an article praising the plant-based meat company. She discussed how major fast food corporations, such as McDonalds, White Castle, Burger King, and even KFC have begun to try plant-based “meats.”

The story argued the following: “The choices are many; the stakes are high. But experts on land use, climate change, and sustainable agriculture told me that two habits tower above all others in terms of environmental impact. To help save the planet, quit wasting food and eat less meat.”

The Atlantic, June 6, 2022. The headline read: “How to Be a Good Person Without Annoying Everyone” and discussed how to convince people to become vegans without angering people or presenting yourself to be morally superior.

The Guardian has become especially anti-meat ever since receiving millions from Gates. Here are samples just from this year.

The Guardian, June 4, 2022. The headline read, “Climate-friendly diets can make a huge difference – even if you don’t go all-out vegan” and the author posed the idea that “Changing habits can be hard but even partial shifts from meat-based menus could significantly decrease planet-heating emissions.”

In an “exclusive” the newspaper wrote, “The report from the Boston Consulting Group (BCG) found that, for each dollar, investment in improving and scaling up the production of meat and dairy alternatives resulted in three times more greenhouse gas reductions compared with investment in green cement technology, seven times more than green buildings and 11 times more than zero-emission cars.

Investments in the plant-based alternatives to meat delivered this high impact on emissions because of the big difference between the greenhouse gases emitted when producing conventional meat and dairy products, and when growing plants. Beef, for example, results in six-to-30 times more emissions than tofu.”

The Guardian, August 16, 2022. The headline reads: “The most damaging farm products? Organic, pasture-fed beef and lamb.”

The author, George Manbiot, an environmental activist, writes, “What are the world’s most damaging farm products? You might be amazed by the answer: organic, pasture-fed beef and lamb. I realise this is a shocking claim. Of all the statements in my new book, Regenesis, it has triggered the greatest rage. But I’m not trying to wind people up. I’m trying to represent the facts. Let me explain.

Arable crops, some of which are fed to farm animals, occupy 12% of the planet’s land surface. But far more land (about 26%) is used for grazing: in other words, for pasture-fed meat and milk. Yet, across this vast area, farm animals that are entirely pasture-fed produce just 1% of the world’s protein.

Livestock farmers often claim that their grazing systems “mimic nature”. If so, the mimicry is a crude caricature.”

Gates may be genuine in his belief that we should stop eating meat, but he also has a significant financial interest in promoting plant-based “meat.” He is one of the largest owners of farmland in the country and a major investor in lab-grown protein products.

NBC News reported, “Bill and Melinda Gates, who recently announced they’re getting divorced and are dividing their assets, are deeply invested in American agriculture. The billionaire couple, in less than a decade, have accumulated more than 269,000 acres of farmland across 18 states, more than the entire acreage of New York City. The farmland was purchased through a constellation of companies that all link back to the couple’s investment group, Cascade Investments, based in Kirkland, Washington.”

He is also a major investor in plant-based meat alternatives. He owns a stake in several companies he often claims are saving the plant, including Beyond Meats, Carbon Engineering, Impossible Foods, Memphis Meats, and Pivot Bio.

Just some food for thought.

Obama Is Right: The Inflation Reduction Act Is A ‘BFD’