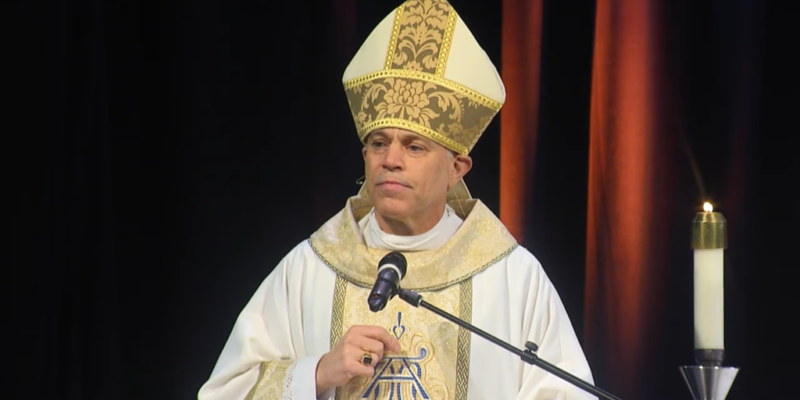 Nancy Pelosi has long considered herself to be a “devout Catholic,” despite constantly doing things against church teaching. In March this year, the Speaker of the House said, “”This [topic of ignoring church teaching when it serves the idol of leftwing politics] really gets me burned up in case you didn’t notice, because again I’m very Catholic, devout, practicing, all of that. They would like to throw me out. But I’m not going because I don’t want to make their day.”

I guess the Archdiocese has decided to make her day instead. Fox News is reporting, “San Francisco Archbishop Salvatore Cordileone announced Friday that House Speaker Nancy Pelosi is barred from receiving Holy Communion due to her pro-abortion stance — marking an escalation in a decades-long tension between the Roman Catholic Church and liberal Democratic politicians on abortion.

Cordileone has written to the California Democrat, informing her that she should not present herself for Holy Communion at Mass, and that priests will not distribute communion to her if she does present herself.

“A Catholic legislator who supports procured abortion, after knowing the teaching of the Church, commits a manifestly grave sin which is a cause of most serious scandal to others. Therefore, universal Church law provides that such persons ‘are not to be admitted to Holy Communion,'” he says in the letter.

However, despite that clarity, liberal Catholic politicians have consistently attempted to try and align their Catholic beliefs with their support of abortion rights. Then New York Gov. Mario Cuomo famously declared himself personally opposed to abortion in 1984, but said he could not impose that view on the country.

The Catechism of the Catholic Church remains straightforward on the issue of t*rminating children in the w*mb, both in practice and in assisting and promoting the practice in others: “Since the first century the Church has affirmed the moral evil of every procured ab*rtion. This teaching has not changed and remains unchangeable.”

It continues by saying, “Direct ab*rtion, that is to say, ab*rtion willed either as an end or a means, is gravely contrary to the moral law,” and labels the practice an “abominable crimes.”

The daughter of a powerful Maryland politician, Pelosi has long used Cathlolicism to mask a political agenda that trades morality for power. In her book, she wrote about her relationship with the Catholic Church, “There’s some areas where we’re in agreement and some areas where we aren’t.” After pushing a bill that would nationalize ab*rtion through nine months of pregnancy, the Speaker said, “I’m Catholic. I come from a pro-life family.”

The church’s actions comes after multiple Catholic churches across the country were attacked by Pelosi’s pro-ab*rtion allies. For example, The Catholic Herald reported the exterior of St. John XXIII parish in Fort Collins, Colorado was vandalized “with red spray-painted inscriptions of ‘My Body My Choice’ and a symbol that appears to be an “A” signifying “anarchy.” Police said the incident took place around 1:15 am on Saturday, May 7, and that some “exterior glass panels” were also broken.”

The Speaker, who will comment on any minor event to serve her party’s agenda, was completely silent on the attacks. Another “devout Cathlolic,” President Biden also had nothing to say about the church attacks. He had previously called protests at the homes of Supreme Court justices as merely “passion.” He also recently called himself a “child of God” in defense of ab*rtion.

It should not be surprising that church leaders have said enough is enough. If you don’t observe the teachings, why should you get to claim them as a shield for your agenda?

As Biden Flounders, Some Dems Look Elsewhere in 2024