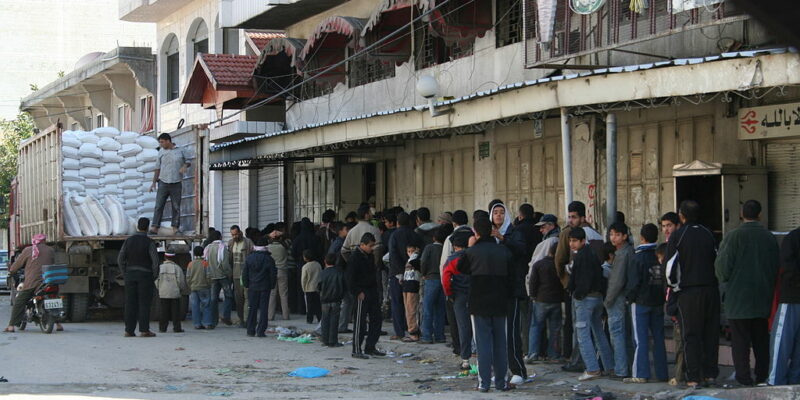 Putin’s disastrous invasion of his neighbor, combined with dramatically rising inflation at home, may soon be hitting your pocketbook while sparking further unrest across the globe. According to the Observatory of Economic Complexity, over a quarter of the world’s wheat is grown in Ukraine and Russia. Wheat is the second most crucial food staple produced in the world, only behind corn.

As the price of wheat hits a 14-year high, some are worried about a “massive scramble by food importers to replace supplies normally sourced from the Black Sea region.” The Washington Post said earlier this week that “Analysts say that the ripple effects of the conflict in Ukraine will further drive up U.S. food prices. And because Russia is a main producer of fertilizer, the conflict could affect what is grown on American soil.”

While Americans will be paying more at the grocery, the rising price of food may undermine the stability of the Middle East. It’s been reported that Egypt, Turkey, and Bangladesh bought over half of Russian-produced wheat.

Back in 2011, PBS examined how the rising costs of food contributed to the Arab Spring.

“‘I think that the prices of food mobilized people,’ said Rami Zurayk, an agronomy professor at the American University of Beirut.

‘If you look at Tunisia, for example, you see that the Tunisian uprising started in the rural area,’ where many small farmers live and are just looking for a means to support themselves and their families, said Zurayk. There, a young man running a vegetable stand set himself on fire to protest corruption, and many people see his action as the start of the Arab Spring.

‘And the Syrian uprising started in Daraa, which incidentally, is in the center of the Horan plains [in the south near Jordan]…one of the centers of origin of wheat and wheat farming in this part of the world,’ he said.”

Egypt spends more than $4 billion to import wheat to feed its over 100 million people. Lebanon’s Economy Minister Amin Salam announced that his country only has one month’s wheat reserves at most and that they are seeking new import agreements from other countries. In Tunisia, bread lines have begun as wheat imports from Ukraine have dried up.

In response to this looming crisis, the Biden Administration has begun to reconsider the Renewable Fuel Standard, which mandates the amount of ethanol in our gasoline. Of course, using more oil would cause the already surging price of that commodity to rise.