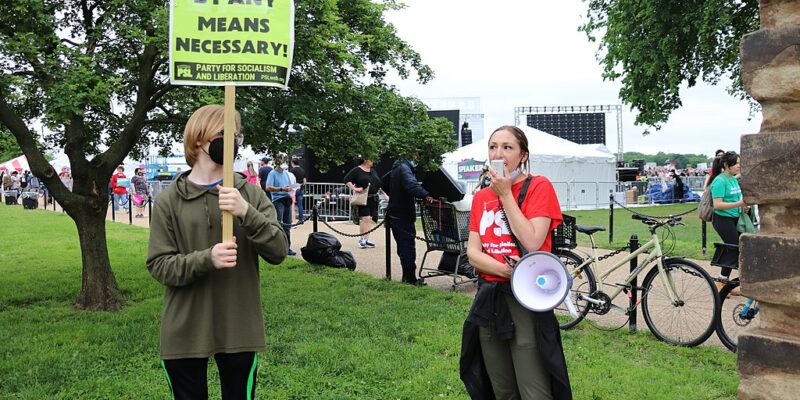 Ludicrously evil. That’s what one pastor called over 200 Democrats after they voted against the Born-Alive Abortion Survivors Protection Act earlier in the week.

So for the "Born Alive Act", did 210 House Democrats just vote to not give medical care to a baby that survives an abortion–meaning that the baby is living and breathing apart from the mother?

We are a ludicrously evil society.

Fox News writes, “The act, which would require medical professionals to provide life-saving care for babies who survive attempted abortion procedures and defines the infants as ‘legal person[s] for all purposes under the laws of the United States,” passed the House of Representatives on Wednesday with a 220-210 vote.

All “no” votes came from Democrats and nearly every Democratic House member voted against the bill.

Eric Scheidler, executive director of Pro-Life Action League, ripped the tally in a statement to Fox News Digital. “Yesterday’s vote chillingly reveals how deep in the tank the Congressional Democrats are for Planned Parenthood and Big Abortion. They aren’t even willing to provide help to a tiny baby who survives a failed abortion, because that shows too clearly how every single abortion violently ends the life of an innocent human being,” he wrote.

“These abortion survivors have to be sacrificed to protect the right to kill unborn babies,” Scheidler added.

The speeches on the House floor given by Democratic supporters of letting an infant die without medical treatment were stunningly horrifying.

Jared Nadler of New York, for example, worried how taking care of a baby who survived an abortion might be risky.

A congresswoman from Illinois, Jan Schakowsky, doubled down on the monstrous display, saying that taking a baby to a hospital after it escaped death at the hands of an abortionist would be dangerous.

Rep. Jan Schakowsky (D-IL): "[The bill] requires immediately taking a struggling baby to a hospital. That hospital could be hours away and could be detrimental to the life of that baby." pic.twitter.com/gsw9atN06u

It’s like they can’t even hear what they are saying as they read the bullet points almost certainly provided to them by Planned Parenthood, which charges about $580 on average for the over 350,000 abortions it performs every year. The organization takes in over $200 million revenue a year from the “service” so there’s a reason why they’re willing to spend over a million on lobbying to keep Democrats in line.

“It’s almost indescribable for me to say what that’s like to see the people who are in opposition of truly who I am and what I have suffered and the population I serve – what they’re still suffering today.”

Ohden survived a dreadful saline infusion abortion during the late 1970s, the news channel explained. She claimed that her birth mother’s family pressured demanded that their daughter’s baby be aborted.

“I soaked in a toxic salt solution for five days being poisoned and scalded to what was intended to be my death. And on the fifth day of the abortion procedure, I was accidentally born alive.”

Although her own grandmother asked that she be left to die, Ohden said, “a brave nurse rushed her to the neonatal intensive care unit for treatment.

‘For me, that’s what the Born-Alive vote is all about,’ Odhen said. ‘Ensuring that babies like me are provided medical care.'”

The National Right To Life applauded Republicans for defending human life, even if it’s people who liberals don’t think deserve it. The organization stated, “Democrats attempted to hijack this common-sense vote to push their agenda of abortion without limit until birth. Rep Diana DeGette (D-Colo.) offered the motion to recommit following debate over The Born-Alive Abortion Survivors Protection Act. The motion to recommit would have amended The Born-Alive Abortion Survivors Protection Act to include the radical “Women’s Health Protection Act”. The motion failed by a vote of 212-219. The so-called Women’s Health Protection Act would nullify all state and federal laws designed to protect unborn children and their mothers.

“The Born-Alive Abortion Survivors Protection Act is reasonable legislation that would protect a baby born alive following an abortion,” said Carol Tobias, president of the National Right to Life Committee. “We thank House pro-life leaders Speaker McCarthy, Majority Leader Steve Scalise, and Rep. Kat Cammack for their leadership on this issue and Rep. Ann Wagner for sponsoring this bill.”

In the wake of the Dobbs v. Jackson decision, several states are moving not only to fully legalize abortion up to the moment of birth but also going to great lengths to insulate abortion providers from even the most basic scrutiny. Against this backdrop, there is renewed urgency to pass The Born-Alive Abortion Survivors Protection Act.

The Born-Alive Abortion Survivors Protection Act requires that, when a baby is born alive following an abortion, health care practitioners must exercise the same degree of professional skill and care that would be offered to any other child born alive at the same gestational age. It also requires that, following appropriate care, health care workers must transport the living child immediately to a hospital.”

ABC noted, “In a statement, Planned Parenthood criticized the bill saying doctors are already required to provide appropriate medical care by law saying that the bill makes up a problem that doesn’t exist.

‘This bill is deliberately misleading and offensive to pregnant people and the doctors and nurses who provide their care. It is yet another attempt by anti-abortion politicians to spread misinformation as a means to their warped political end: to ban safe and legal abortion,’ Jacqueline Ayers, the senior vice president of policy, organizing, and campaigns at Planned Parenthood Federation of America said in a statement about the bill.”

However, ABC also reported that in Minnesota, a state that monitors how many failed abortions happen, three such cases occurred over the past year. Though the babies ended up not survivng, liberals in that state appear to be worried that they might not get so lucky next time.

One outlet reported, “A bill to repeal numerous longstanding abortion-related laws in Minnesota, including a law protecting newborns who survive abortion from being left to die, passed a Minnesota legislative committee today. The bill, H.F. 91 (S.F. 70), was approved by the House Health Finance and Policy Committee on an 11-8 vote.

“This utterly extreme bill would leave virtually no protections for unborn children, at any stage of pregnancy, on the books in Minnesota,” said MCCL Co-Executive Director Cathy Blaeser. “Most appalling, though, H.F. 91 would even repeal protection for the life of an infant born alive after abortion, moving Minnesota backward from a community of compassion to one of active and callous cruelty.”

Other laws H.F. 91 would eliminate are currently in effect. They include the Born Alive Infant Protection Act, which states that “all reasonable measures consistent with good medical practice, including the compilation of appropriate medical records, shall be taken by the responsible medical personnel to preserve the life and health of the born alive infant.” In 2021, according to the Minnesota Department of Health, five abortions resulted in a born-alive infant.”

The law would also allow abortion providers to hide how many babies survive abortion so that liberals can pretend it never happens. It would “eliminate Minnesota’s abortion reporting law, which requires the state to collect basic data about how abortion is practiced, including data about injuries and deaths resulting from abortion.”

Later in the day, all but three Democrats voted against a billing condemning “recent attacks of vandalism, violence, and destruction against pro-life facilities, groups and churches” and “calls upon the Biden Administration to use all appropriate law enforcement authorities to uphold public safety and to protect the rights of pro-life facilities, groups, and churches.”

During debate on the House floor Wednesday, Rep. Ann Wagner (R-Mo.) called attention to the incidents, but it fell on deaf ears from Democrats, lest the sweet sweet abortion campaign funding dry up.

She said, “There have been now nearly 100 recorded acts of violence and intimidation against pro-life individuals and organizations by radical, pro-abortion activists since the initial leak of the draft Supreme Court Dobbs opinion,” she said.

“Following the leak and issuance of the Supreme Court’s decision in Dobbs vs. Jackson Women’s Health Organization, anti-life fanatics have targeted, destroyed, or vandalized, as I said, over 100 pro-life facilities, groups, and churches to further their radical cause,” she added.

Democrats still voted no. Ludicrous is an accurate description, but grotesque might be the better word for them.