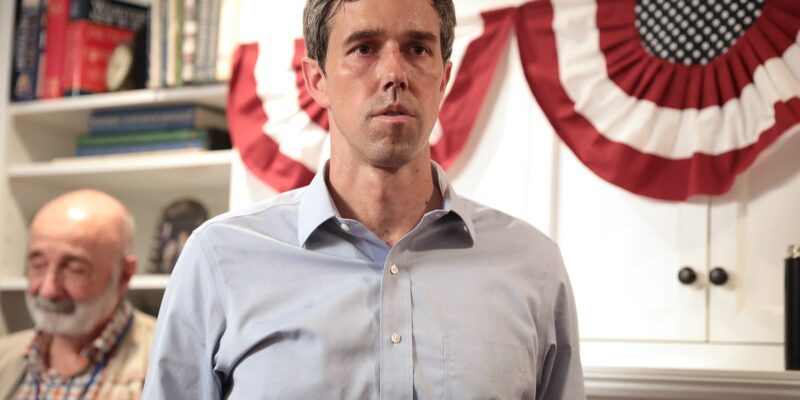 There’s a saying: “if you can’t do, teach.” When it comes to politics, there may be no one who has proven he “can’t do” more than Beto O’rourke. So, it makes sense that the three-time loser from Texas has landed a plush teaching gig at the University of Chicago along with some other political outcasts, like Ohio’s Tim Ryan, who lost their last races.

Newsmax writes, “Former Democrat lawmakers Tim Ryan and Beto O’Rourke have been selected as academic fellows by the University of Chicago’s Pritzker Fellows Program for the school’s spring semester.

O’Rourke, who lost his campaign for Texas governor last year to Greg Abbott and served as the U.S. representative for Texas’s 16th Congressional District from 2013 to 2019, will lead seminars “using Texas as a case study to explore the present and future of U.S. democracy.”

Ryan, a former U.S. representative from Ohio who lost his Senate race to now-Sen. J.D. Vance, a Republican, will examine the political and cultural divides impacting the U.S. electorate.

Beto will certainly be able to tell the students what it’s like to lose a race for Senate, President, and Governor of Texas.

There’s a reason why most of the positions are stocked full of loser Democrats. Forbes noted, “The Institute of Politics (IOP) was founded at the University of Chicago in 2013 by David Axelrod, former senior advisor to President Barack Obama. Created as a nonpartisan organization and affiliated with the Harris School of Public Policy, IOP “encourages and assists University of Chicago students to explore careers in public and social service and provides extracurricular opportunities in politics and policymaking.”

Included in IOP’s programming are the Pritzker Fellows program, funding of various political, policy and public interest internships; and a series of public speakers discussing current events and political life.

Axelrod has served as IOP’s Director since its founding, but in January, marking the institute’s tenth anniversary, he stepped back from that role to become the chairman of IOP’s Board of Advisors and assume a new post as a Senior Fellow. Heidi Heitkamp, former Democrat Senator of North Dakota and herself a former Pritzker Fellow, has been named the new director.”

While liberal magazines like Vanity Fair say that “we don’t deserve Beto” most Texans are likely glad to see him head to the Midwest so that he’ll stop annoying them.

Following the tragedy of the Uvalde school shooting in the summer of 2022, O’Rourke, who was running for governor at the time, disrupted local officials and family members to try and make the incident about his own campaign.

The AP described the scene: “Former U.S. Representative Beto O’Rourke stood up and interrupted a news conference on Wednesday by Texas officials following the latest mass shooting in the state, shouting, ‘You are doing nothing!’

Attendees screamed at the Democrat to be quiet as security officials attempted to escort him from the room.

Uvalde Mayor Don McLaughlin stood up to O’Rourke’s attempt to take over the press conference and move it away from the victims and their families, saying, “You’re a sick son of a bitch who would come to a deal like this to make a political issue.”

In the immediate aftermath of being crushed in the election by Governor Greg Abbott, Yahoo said, “Democrats are desperate to make inroads in Texas — where the emerging Latino vote is the focus of intensive pitches by both parties — but after a third high-profile defeat, they will probably look to another candidate to bring them victory.

Tuesday’s defeat marks the end of a half-decade stretch during which O’Rourke stoked Democratic hopes but, ultimately, proved incapable of fulfilling those aspirations. As the Washington Post pointed out in a recent profile, he last won an electoral contest in 2016, to the same House seat he had held for the previous four years. Since then, he has gone after some of the most sought-after elected offices in the nation, only to come up short each time.

‘He’s been campaigning virtually nonstop since 2017,’ the head of the Democratic Party in Texas told the Post.”

One can only imagine what his syllabus will look like:

Week 1: How To Marry The Daughter of a Billionaire.

Week 2: How To Be So Incompetent He Wants You Nowhere Near His Company.

Week 3: How To Get Your Father-In-Law To Buy You A City Council Seat.

Week 4: How To Be Father-In-Law’s Crony, Approve Real Estate Deals.

Week 5: How To Fail Upward And Pad Your Family’s Pocketbook.

Week 6: Virtue Signaling 101, Getting Onto Magazine Covers Is Easy

Final Exam: How To Step On The Graves Of Children And Preen

Either way, I’m sure his students will be impressed. The $85,536 for room and board at the University of Chicago seems worth every penny.