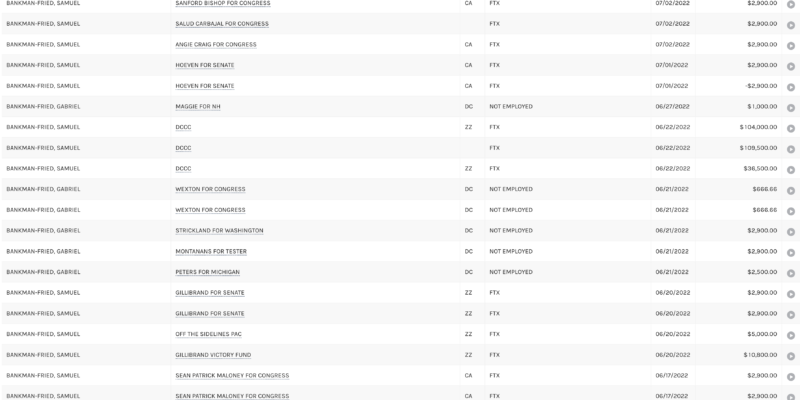 A major Democratic donor may have fled the country after stealing billions of dollars from unwitting customers. Sam Bankman-Fried, sometimes referred to as SBF, the founder and former CEO of FTX, a cryptocurrency exchange that recently declared bankruptcy “after a rush of customer withdrawals earlier this week, was whispered to have gone into hiding in South America.

Rumors swirled over the internet over the week that the FTX founder had “fled to Argentina as the saga surrounding his collapsed cryptocurrency exchange continued to unfold in near-real time on Twitter.

In a text message to Reuters on Nov. 12, Bankman-Fried, who also goes by SBF, said he was still in the Bahamas. When Reuters asked him specifically whether he had flown to Argentina, as the rumors suggest, he responded: ‘Nope.’

Users took to Twitter over the weekend to speculate whether SBF was on the run after filing for Chapter 11 bankruptcy for FTX Group, which includes a slew of companies such as FTX Trading, FTX US and Alameda Research. The rumors started after users tracked the coordinates of his private jet using the flight tracking website ADS-B Exchange. The tracker suggested that SBF’s Gulfstream G450 had landed in Buenos Aires on a direct flight from Nassau, Bahamas in the early hours of Nov. 12.”

Over the past few years, FTX has spent millions of dollars in sponsorships, including the naming of a basketball arena of the Miami Heat and buying an expensive super bowl ad.

More disturbing, however, is the way that FTX, along with Bankman-Fried, personally bought Democrats.

The Washington Post writes that “Bankman-Fried, the 30-year-old wunderkind of cryptocurrency, spent tens of millions of dollars over the past year trying to reshape how Washington and the world think about finance.

The crypto exchange he founded, FTX, had become an industry-dominating business in just three years, valued at $32 billion as recently as January. He amassed political clout in an even bigger hurry, emerging from obscurity to become the second-biggest Democratic donor in the midterm elections.

By Friday, the money and the clout had disappeared: Bankman-Fried resigned from FTX, which then filed for bankruptcy. On Saturday, the company revealed it was investigating ‘unauthorized transactions’ worth more than $400 million and that it had moved all funds into offline storage. And Bankman-Fried was left facing harrowing questions about his role in the most catastrophic collapse the notoriously volatile crypto industry has so far seen.”

“Mega-donor” is putting it lightly. SBF has essentially been paying for influence over Democrats, and a couple Republicans, who would otherwise be focused on monitoring his company and protecting Americans from being swindled.

Wapo continued, “In March, he appeared at the House Democratic retreat in Philadelphia with his arm around House Financial Services Committee Chair Maxine Waters (D-Calif.). In April, he turned up in the office of Caroline Pham, a Republican member of the Commodity Futures Trading Commission, less than a week after she assumed the post, along with Mark Wetjen, the former acting chair of the agency and now Bankman-Fried’s top Washington adviser. Hill staffers say they regularly spotted him around the Capitol, shuttling between meetings flanked by Wetjen and Eliora Katz, who joined FTX this summer from the staff of the Senate Banking Committee’s top Republican, Patrick J. Toomey (Pa.)”

The Daily Caller has investigated the way he shaped Washington by buying politicians. “Bankman-Fried’s FTX is currently under investigation by the CFTC and the Securities and Exchange Commission (SEC) after Bankman-Fried allegedly moved $10 billion in client assets from his crypto exchange to his trading firm Alameda Research, and a liquidity crisis at his exchange which prompted the company to file for bankruptcy. However, prior to the agency’s probe, Bankman-Fried aggressively courted the CFTC – and funded several key lawmakers charged with overseeing the agency, pouring cash into their campaign coffers.

The CFTC is charged with regulating certain elements of the crypto marketplace, including digital assets that are commodities as well as crypto exchanges and clearinghouses. The agency is overseen by the Senate and House Agriculture Committees, with the former tasked with approving CFTC commissioners nominated by the president.

The former FTX CEO personally donated to the Senate committee’s chairwoman, Democratic Michigan Sen. Debbie Stabenow, contributing over $20,000 to the Stabenow Victory Fund and $5,800 to her campaign for Senate. Bankman-Fried donated roughly $6,000 to the committee’s ranking member, Republican Arkansas Sen. John Boozman, as well, and $5,800 to the ranking member of the Subcommittee on Commodities, Risk Management and Trade, Republican Montana Sen. John Hoeven.

Bankman-Fried is also a key funder of the Protect Our Future PAC, which primarily works to elect Democrats, bankrolling the group to the tune of $27 million this election cycle. The PAC spent over $1 million funding Democratic Ohio Rep. Shontel Brown, a member of the House Agriculture Committee.

Politico reported, “Sam Bankman-Fried helped bankroll Democrats’ overperformance in the midterms. But any friends he may have had in Washington won’t be there for him as his crumbling business empire threatens to torpedo the entire digital currency market.”

The magazine noted that he “contributed more than $40 million to Democratic candidates and a network of super PACs that promoted crypto and public health policies.

But even Bankman-Fried’s political aspirations proved wobbly in recent weeks. He angered progressive Democrats in October when he walked back plans to spend $1 billion on races through 2024, saying in a POLITICO interview that his pledge was a “dumb quote on my part” and that he didn’t believe additional contributions would make an impact.”

State and federal regulators are have begun their investigations into the shady cryptocurrency exchange FTX. They aim to decide if it harmed its clients or broke financial regulations.

Democrats will have to find another billionaire to fund their continued attempt at a progressive takeover of the country in 2024. Maybe Hunter Biden knows a guy?

Pelosi Says McCarthy Doesn’t Have What It Takes, GOP Rumored To Look Towards Scalise