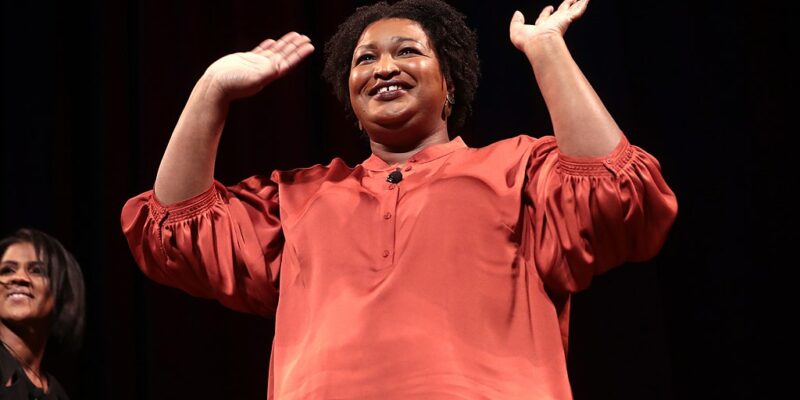 The organization founded by Stacey Abrams to fight for voting rights, Fair Fight, operated much like a “scam PAC.” The group has focused much of its effort fighting a losing battle in court against Georgia’s election laws gave a significant portion of its fundraising dollars to a “boutique law firm” that just so happens to be owned by the campaign chairwoman for Abrams’ campaign for governor.

If you’re like most people following the race for governor in Georgia, you could be knocked down with a feather at the news. Politico first investigated the matter.

Allegra Lawrence-Hardy, Abrams’ close friend who chaired her gubernatorial campaign both in 2018 and her current bid to unseat Georgia Gov. Brian Kemp, is one of two named partners in Lawrence & Bundy, a small firm of fewer than two dozen attorneys.

Fair Fight Action has maintained that the suit — which ended last month when a federal judge ruled against the group on all three remaining claims — served an important role in drawing attention to voting inequities. But some outside the group questioned both the level of expenditures devoted to a single, largely unsuccessful legal action and the fact that such a large payout went to the firm of Abrams’ close friend and campaign chair. Those concerns were heightened by the fact that Abrams’ national campaign against voter suppression galvanized the Democratic Party, many of whose top donors helped fill its coffers.

The case, and the organization that spawned it, was at the cutting edge of Abrams’ nationwide drive to expand voter access, a cause that made her a rising star among liberals and an alleged victim of GOP efforts to limit participation, especially among minorities. Abrams, a Democrat, created Fair Fight Action shortly after her loss to Kemp, a Republican, in the 2018 gubernatorial race, by a narrow margin of 50.2 to 48.8 percent. Afterward, she claimed that thousands of voters, a disproportionate number of whom were people of color, were effectively disenfranchised by overly restrictive voting rules. Within days of her loss, she committed herself to a massive effort to expose voter suppression, galvanizing many Democratic donors and activists.

AP reported earlier in the year about the failed case, “Although Georgia’s election system is not perfect, the challenged practices violate neither the constitution nor the VRA,” U.S. District Judge Steve Jones in Atlanta wrote, referring to the Voting Rights Act of 1965. He detailed his reasoning in a 288-page order.

The lawsuit was filed in November 2018, just weeks after Abrams narrowly lost the governor’s race to Republican Brian Kemp. Throughout that contest, Abrams had accused Kemp, then secretary of state, of using his position as the state’s top elections official to promote voter suppression. Kemp vehemently denied the allegations.

ProPublica Senior Editor and Reporter Jessie Eisinger noted that the payment fees to Abrams’ friend were untypical for the lawyer’s work on the case.

-Largely on one legal case

-The fees were way above typical

Activism has been a highly lucrative gig for Abrams. In April, NCP detailed how the denying that she lost the election in Georgia ended up making the current Democratic nominee for governor rich. “Who could have guessed that activism paid so well? When Stacey Abrams originally launched her 2018 campaign for Georgia governor, she revealed in financial disclosure documents that she owed the IRS over $50,000 and held nearly $170,000 in credit card and student loan debt. That spring her net worth was recorded to be about $110,000 overall. Since 2018 her financial prospects have really changed.

As Abrams prepares to run for governor once again, the former minority leader in the Georgia House of Representatives has had to reveal that she’s worth well over $3 million nowadays. Shortly after her failed campaign, Abrams launched a non-profit charity to support voting rights that raked in over $50 million in fundraising.”

Things have not been going well for Abrams campaign for election, as she might call it, reelection, to become the Peach State’s next governor. As The New York Times recently commented, “Georgia Democrats have grown increasingly pessimistic about Stacey Abrams’s chances of ousting Gov. Brian Kemp from office, pointing to her struggles to rally key parts of her party’s coalition and her inability to appeal to a slice of moderate Republican voters who can decide the state’s elections.

Public and private polls have consistently shown her trailing Mr. Kemp, a Republican seeking a second term. And, in a particularly worrying sign for Ms. Abrams, polls also show she is drawing less support than the other high-profile Democrat on the ballot, Senator Raphael Warnock, who is seeking a first full term. The gap between the two Democrats, which is within the margin of error in some recent surveys and as wide as 10 points in others, highlights the extent of her struggles. Though she is beloved by Democratic voters, she has lost some ground with Black men, who provided crucial backing in her narrow loss to

Mr. Kemp in 2018. And while Mr. Warnock draws some support from Republican moderates, Ms. Abrams — who has been vilified more by the G.O.P. than any other statewide figure — has shown little sign of peeling off significant numbers of disaffected Republicans.

Ms. Abrams’s standing — consistently trailing Mr. Kemp in polls by around five percentage points — has alarmed Democrats who have celebrated her as the master strategist behind Georgia’s Democratic shift.”

If polls are right, the only question that will soon be left is whether Abrams accepts the result of the election this time around. Her pocketbook and her friends may once again make her say no way.

As Red Wave Approaches, Dems Back Away From Ending Filibuster, Call For Foreign Monitors of Election