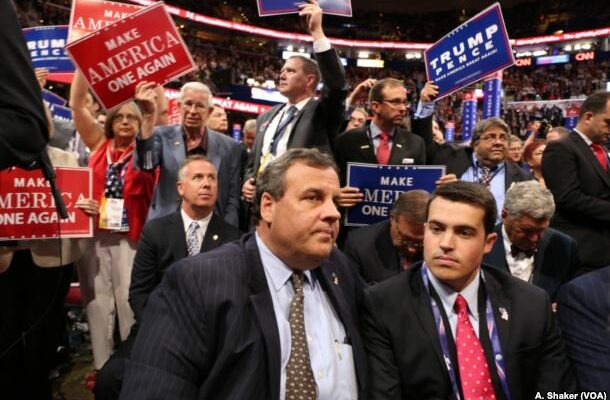 Former President Donald Trump’s grip on the Republican Party has weakened so much that even his former staunch allies are laughing at him now. At a business convention in New York, former New Jersey Governor Chris Christie mocked Trump’s legal troubles in front of a chuckling crowd earlier in the week.

Christie, who ran against Trump for the Republican nomination in 2016, said, “We have a former president of the United States who [went] on national television last night and said ‘I declassified the documents thinking about it. Imagine all I could have accomplished if I only knew that I didn’t actually have to do it. I just had to think about it — this is a credible candidate for 2024.”

Last month Trump’s home, Mar-a-Lago was raided because he allegedly had taken classified documents out of the White House with him after his presidency.

CBS reported, “Generally, a president’s instructions to declassify documents are first written down in a memo, typically drafted by White House lawyers, which the president would then sign. Relevant agencies are usually then consulted and when a final decision is made, the document would be marked, with its old classification level crossed out, and stamped, “Declassified on X date” by the agency in question.

The former advisor, fresh off seeing an assassination attempt on him thwarted, said, ‘My concern was that he didn’t feel that the confidentiality of much of this information was as important as we knew it to be,’ Bolton said. ‘It just didn’t register with him that safeguarding this information for its own sake, and because of the risk to sources and methods of obtaining the intelligence, could be jeopardized.'”

Christie’s comments, according to The New York Post, “are the latest in a series of clashes between the former political allies. Trump mocked Christie’s weight in a widely shared post on his Truth Social media platform after Christie said last Sunday that Trump’s handling of top-secret docs left the FBI with “no choice” but to raid Trump’s Florida home.

There is a sector of our party, which cannot find themselves genetically unable to not defend Donald Trump,” Christie said at another point in his hour-long address while criticizing fellow Republicans for backing the ex-president’s evidence-free claims of mass voter fraud in the 2020 presidential election.

‘He doesn’t have the guts to fire somebody face-to-face,’ Christie said of the ‘Apprentice’ star.

‘He has fired two chiefs of staff on Twitter and a number of other cabinet members. Because that you’ll do all by yourself sitting alone in your room staring at your phone. And you could call them any name you want,’ he added.

Late last year, Politico wrote that Christie was trying to get from under Trump’s shadow and create a lane to the 2024 Republican nomination. The magazine said, “The former New Jersey governor has launched what amounts to a de facto exploratory bid for president, and it’s already put him on a collision course with his longtime political ally.

While Christie’s criticism of the party’s focus on the 2020 election results and subtle knocks on other aspects of Trump’s term are designed to create a distinct lane for him in the 2024 primary, he’s also courting confrontation with a former president who still commands the loyalty of the Republican base.

‘He’s traveling the country, saying what he learned and saying he’s not afraid of Donald Trump. That sets him out in a different lane from anyone else who might run for president in the party,’ said veteran Republican strategist Scott Reed. ‘Christie is a guy who knows how to create a narrative. He can throw a punch and he can take a punch.’

Christie recently stepped up his fire in media appearances, highlighting how Trump lost his reelection and suggesting he’s a ‘loser’ for dwelling on 2020. At a Saturday speech to the Republican Jewish Coalition, Christie was the only one of six potential presidential candidates who dared suggest that looking back at November was a bad idea.”

The story quoted an ally of Christie who said that the former New Jersey governor was trying to put Trump in the rearview mirror.

It looks like the former friends have become enemies after things began to get too hot.