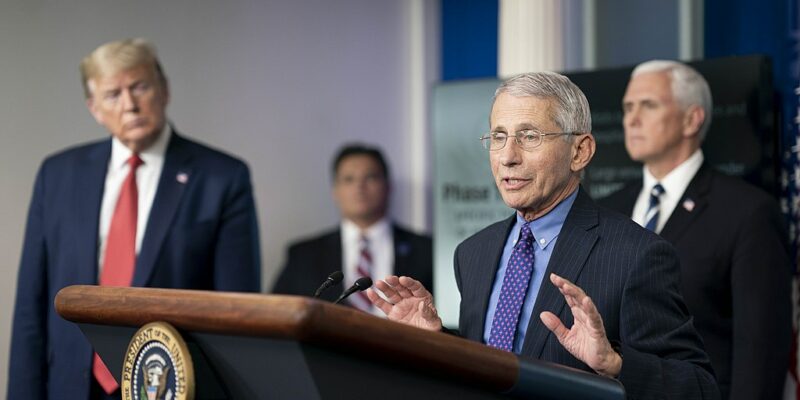 Update, 8/24/2022: Tonight in Florida Governor Ron DeSantis called out Fauci for his actions during the pandemic as he rides off into the sunset. The potential 2024 contender said, “You have people like Fauci saying that his lockdowns didn’t cause any permanent damage to young kids. I got news for you, it did, and we’re going to reap those rewards across the whole country for years and years and year because they treated kids so poorly. I’m just so sick of seeing him. I know he says he’s going to retire. Someone needs to grab that little elf and chuck him across the Potomac.”

DeSantis is right. The COVID lockdowns proved incredible harmful to many of our children across the world. In England, for example, “The youngest children at primary schools in England were the worst affected by learning loss after last year’s pandemic lockdown, with those aged six and seven most likely to fall behind in maths and writing, according to new evidence.

Data taken from 6,000 primary schools and nearly 1.5 million pupils found a steep drop in the proportion who were reading, writing and doing maths to the level expected at the end of last summer. The report also found that younger children took longer to recover their lost learning after they returned to the classroom in September, according to The Guardian.

Johns Hopkins reported, “During the lockdowns, many children were not able to be treated for different infectious diseases, receive routine immunizations or attend school,” says study author Marcelo Cardona, MSc, of the ROCKWOOL Foundation in Denmark. “These could have serious socioeconomic consequences not just now but in the short- and long-term, since a child’s development has been put in jeopardy.”

According to other sources, a “study published by Brown University said lockdowns, mandates and other restrictions are likely to create a generation of children with lower IQs and signs of social brain damage.

Other studies have reported increased mental illnesses presenting among minors impacted by ongoing lockdown policies, stress and isolation from their peers, as well as unfounded fears associated with the coronavirus, which killed fewer than 800 of the 73.3 million Americans under the age of 18.”

In 2020, Vice wrote, “There should be a national stay-at-home order to combat the spread of the coronavirus, said Dr. Anthony Fauci, the director of the National Institute of Allergy and Infectious Diseases and a member of the Trump administration’s coronavirus task force, on Thursday night, adding: ‘I don’t understand why that’s not happening.’”

Original Story:
As it looks more and more likely that the Republicans will at least take over the House of Representatives, NIAID Director Anthony Fauci has stayed true to his word that he’d be leaving his position “sooner rather than later.”

Earlier in the year he told NPR, “I plan to step down from my current position sometime between now and then and to go on and pursue other directions in my professional career. That has somehow been interpreted as my announcing my retirement. When I do decide on the date of stepping down I will make a formal announcement.”

That announcement finally arrived. He announced he will be retiring in December after five decades of government service to pursue the “next chapter” of his career. This will ensure that he will not face a skeptical Republican caucus in 2023.

As we wrote before, the NIAID director has had quite a career so far. Despite their later spats, during the beginning of COVID-19, President Trump provided Fauci with near-unprecedented authority over the pandemic response, opening a Pandora’s Box of sorts. With Trump handing the reins to Fauci by making him the face of the president’s response task force, he pushed national stay-at-home orders at the beginning of the pandemic and supported federal guidelines signed off and extended by the president to cover much of the Spring of 2020.

He also served as a leader in fighting the AIDS epidemic in Africa under George W. Bush, who gave him the Presidential Medal of Freedom in 2008.

Fauci will be retiring with the largest pension in the history of the federal government. It has been reported that “Fauci’s first year pension payout will exceed $414,000 – more than the salary for the President of the United States ($400,000).”

NPR offered a review of his career: Dr. Anthony Fauci, who played a critical role in steering humanity through the two pandemics of our time, AIDS and COVID-19, announced Monday he is stepping down from his role in the federal government.

As of December, he will leave the position he’s held for 38 years as the director of the National Institute of Allergy and Infectious Diseases, as well as his job as chief of the NIAID Laboratory of Immunoregulation, and his role as Chief Medical Advisor to President Joe Biden.

Fauci, 81, served under seven U.S. presidents and helped lead the country through numerous health crises. He was instrumental in combatting the AIDS epidemic, starting as the youthful director of the National Institute of Allery and Infectious Diseases in the early 1980s. He also took center stage in a politically fraught response to the nation’s COVID-19 pandemic, and he was both praised and assailed for his tell-it-like-it-is philosophy.

Department of Health and Human Services secretary Xavier Becerra, who took leadership of the agency a year into the COVID pandemic, said he relied on Fauci’s counsel and praised him for “his ability to break down complex science in simple terms to the American people to save lives.”

Biden praised Fauci in a separate statement, saying, “I extend my deepest thanks for his public service. The United States of America is stronger, more resilient, and healthier because of him.”

Fauci has grown increasingly frustrated with criticism of his often overbearing tactics in fighting COVID-19. In November 2021, amidst massive criticism about whether or not he funded dangerous studies of viruses that made humans more susceptible to them, he claimed to “represent science” and made the claim that any critique of him was actually a critique of science itself.

The Hill recently reported that “Congressional Republicans are eagerly floating investigations into Anthony Fauci and the Biden administration’s response to the coronavirus pandemic if they win back control of the House or Senate in the midterm elections.”

Kentucky Senator Rand Paul, an ophthalmologist, has especially served as Fauci’s chief antagonist. Earlier in the year, he told a conservative podcast, “If we win in November, if I’m chairman of a committee, if I have subpoena power, we’ll go after every one of [Fauci’s] records. We’ll have an investigator go through this piece-by-piece because we don’t need this to happen again.”

That’s much easier to do if the person you’re investigating is still a member of the federal government. Fauci will be long gone.

Michael Brendan Dougherty at National Review summed up the ways in which Fauci went from a trusted public servant early in the pandemic to an egomaniac who’s hurt our country’s response over the long haul with his inconsistent messaging.

Writing about Fauci’s “I am the Science” remarks, the writer stated, “This is a bad joke. Public health was already deeply politicized. Public-health bodies kowtowed to China early in the pandemic and dragged their feet on declaring a public-health emergency because they wished to spare from embarrassment the oversensitive Communists who run China. Public-health officials were against border controls early on, not because the science backed up their view, but because their politics required it. Fauci amplified Peter Daszak’s campaign to label the lab-leak theory a “conspiracy theory” because of politics; they thought that it would hinder funding of research they believed in.

While it is absolutely true that some Republican senators calling for the legal prosecution of Fauci are cynical showmen, Fauci is responding in kind.

Fauci’s biggest problem over the past couple years has been his own arrogance, which was caused not by his confidence in medicine but in his ability to communicate clearly and in a nuanced way.

He often assumed that his critics are merely bumpkins who like to yell, not educated people who’ve read studies, for example, that show lockdowns “had little to no public health effects” while also imposing “enormous economic and social costs where they have been adopted.”

Fauci’s near-total dedication to wearing a facemask has created an almost religious-like belief that covering one’s face is a panacea against catching a disease, any disease.

This past weekend, for instance, The New York Times, reporting about Monkeypox, an illness that has mostly spread among gay men having sexual contact, said, “Parents who are concerned about the virus may also be relieved to know that many pandemic precautions and behaviors can be repurposed to protect children against monkeypox: wearing masks in crowded indoor areas, avoiding sharing personal use items, increasing the frequency of hand washing and isolating at home when you’re sick.”

Not even the CDC thinks we should wear masks as a way to prevent Monkeypox.

Fauci’s problem has come from his desire to dictate rather than convince, explain, or weigh options against each other. It’s not surprising that a poll earlier in the year indicated “60% of U.S. adults say they’ve felt confused as a result of changes to public health officials’ recommendations on how to slow the spread of the coronavirus.”

In the end, he was a good public servant who stayed a decade too long in his powerful post. The attention he received went to his head.

Dougherty continued by describing his problem as the pandemic went on and on, “The question is whether the Biden administration can stand to have Fauci much longer. Fauci has gone on television to preemptively cancel Christmas, only to reel it back the next day. He went on the talk shows this weekend to say nothing useful about the new variant of the disease, but to lecture the world to prepare for the imposition of the same policies that failed to contain the previous, less infective variants.

We now know the answer to his question: the Biden Administration could stand it up until Republicans have the power to ask questions next January.

Newspapers Are Dying Because Their Journalists Can’t Help Themselves