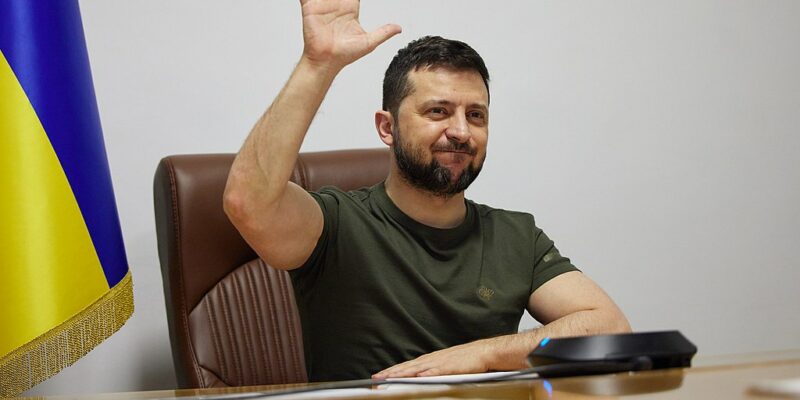 [President Of Ukraine from Україна, CC0, via Wikimedia Commons]

The cost of supporting Ukraine against the Russian invasion recently crossed a disturbing road marker. With the recent promises from the Biden White House, backed by both Republicans and Democrats in Congress, the United States has committed more money to Zelensky’s forces than we spent during the first five years in Afghanistan following the attacks of September 11.

Fox News reports that “the Pentagon on Friday confirmed that the U.S. has provided $8 billion in security assistance since Russia’s invasion in February, but Washington has committed to spending far more.

Earlier this year, Congress committed to spending $54 billion in traditional foreign aid and military assistance in a move to help squash Putin’s offensive. The funds will largely be divided through traditional channels to support Ukraine but will also provide support to NATO nations and U.S. troops stationed in Europe.

There are measures in the latest $40 billion package passed in May that could take years to implement, like the procurement of an additional Patriot missile battery that could potentially be built in an allied nation like Poland, according to a report by the Center for Strategic and International Studies.

It remains unclear how much the U.S. will end up spending in 2022 on countering Putin’s aggression, but, according to information provided by ForeignAssistance.gov, the U.S. has already spent more on security assistance to Ukraine than during the first five years in Afghanistan.

President Biden recently announced his intentions to supply Ukraine with precision HIMARS rocket systems after Ukrainian officials promised not to use them to strike targets in Russia. Ukrainian forces used the missiles to destroy a Russian ammunition depot in Kherson, located in the southern part of their occupied country.

The bulk of the weapons and financial aid will probably be sent over by the end of the year. The president is determined to support Ukraine no matter what the cost. In response to a question about how long Americans should expect to pay increased fuel costs, the president said, “As long as it takes, so Russia cannot in fact defeat Ukraine and move beyond Ukraine.”

The spending in Ukraine is ominous for those who fear that we may be entering another “forever war.” USA Today wrote that the estimated cost of conflicts stemming from September 11 cost the United States a whopping $5.8 trillion. “That includes direct and indirect spending on everything from military equipment to homeland security to death gratuities for the families of slain American service members.”

Researchers at Brown University have tallied the estimated Congressional appropriations and spending specifically on the Afghanistan war to cost Americans $2.313 trillion. That figure does not account for interest payments on the debt and the future costs of caring for our veterans.

The Wall Street Journal recently warned that NATO should be ready for the long haul in Ukraine, writing, “The West’s strategy is to give the Ukrainians enough military aid to defend against Russian advances, and to counter Vladimir Putin’s belief that he can win on the ground or wait out the Alliance until it runs out of gas, wheat or patience—in other words, to wait Mr. Putin out. The likely result will be a prolonged and bloody stalemate reminiscent of the Western Front of 1915.”

“The NATO strategy to resupply the Ukrainians for ‘as long as it takes’ means that this phase could be longer and far bloodier than earlier phases,” the newspaper concluded, “The rate of casualties among the military and civilians will likely increase. More infrastructure within range of artillery and missiles will come under attack as exhaustion tactics not only seek to kill and wound, but also to terrorize and demoralize. Severodonetsk, like Mariupol, resembles Amiens in 1915, Berlin in 1945 and Mosul in 2017.”

Russia is also not without its own allies. National security adviser Jake Sullivan recently announced that Iran had begun to supply Putin’s army with drones. Politico reported the Biden adivisor as saying, “Our information indicates that the Iranian government is preparing to provide Russia with up to several hundred [unmanned aerial vehicles], including weapons-capable UAVs on an expedited timeline. It’s unclear whether Iran has delivered any of these UAVs to Russia already.”

Putin believes he still has cards to play. CNBC has reported that “Europe is bracing for an extended shutdown of Russian gas supplies as maintenance work begins on the Nord Stream 1 pipeline that brings gas to Germany via the Baltic Sea.”

The news channel said that we should be ready for “maximum economic warfare.” Putin cutting off natural gas, according to one analyst, would “push (already high-wateringly high) gas prices even higher, it will also massively impede the ability of many countries in Europe (notably Germany and some south-eastern neighbours) to build up sufficient gas storage for this winter.”