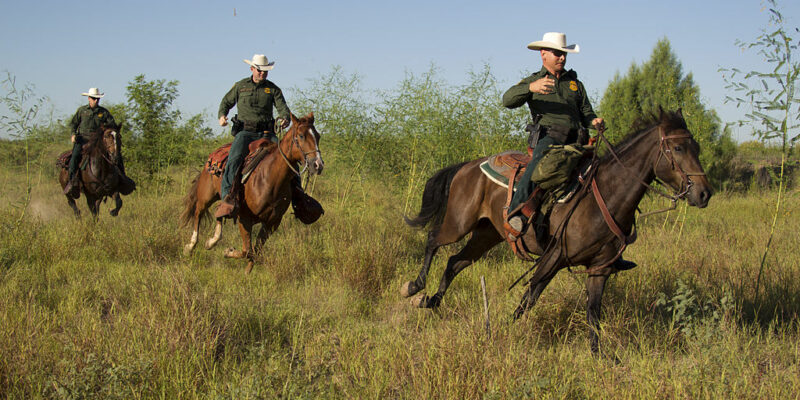 We are currently living in the era of the White House being controlled by what it sees on social media. Whether it’s the obsession with drag queens or jumping on the bandwagon to support hate-crime hoaxes, liberal leaders throughout the country are constantly being guided by the most gullible and deranged of their exceedingly-online political base. Now some Border Patrol agents are paying the price.

In September 2021, Sawyer Hackett, a leftwing communications strategist, and advisor to Obama cabinet official Julian Castro, tweeted a photo of border patrol agents riding a horse while intercepting illegal immigrants crossing the border. Because they were riding horses, they were also holding horse reins. Hackett, who’s obviously never seen anyone on horseback before, captioned the photo: “Border patrol is mounted on horseback rounding up Haitian refugees with whips. This is unfathomable cruelty towards people fleeing disaster and political ruin. The administration must stop this.”

Another incompetent (or corrupt) journalist jumped on the viral tweet’s bandwagon. Ryan Devereaux, a writer for The Intercept, described the scene as, “Border Patrol agents on horseback cracking whips and charging into crowds of Haitian asylum seekers in Texas, shouting at them to go back to Mexico — strong reporting from @psskow  on the situation in Del Rio/Ciudad Acuña.”

Democrats, including the party’s top leaders, immediately pounced on the obviously misleading caption knowing that the photographer had debunked the description. Senate Majority Leader Chuck Schumer wrote, “The images of inhumane treatment of Haitian migrants by Border Patrol—including the use of whips—are unacceptable They are fleeing violence and natural disaster and seeking protection in our country The Administration must uphold our refugee laws and stop Title 42 deportations.”

Oregon Senator Jeff Merkley almost immediately stated, “Use of whips on refugees? Disturbing and unacceptable. This must end immediately.

Nancy Pelosi released a carefully-worded statement, as well, saying, “Reports of the mistreatment of Haitian migrants fleeing violence and devastation from natural disasters are deeply troubling, including the inappropriate use of what appear to be whips by Border Patrol officers on horseback to intimidate migrants.”

A closer reading of Pelosi’s statement helps reveal that Democratic officials knew they weren’t being truthful. Note she did not say that the agents were using whips or that she saw the photographs that showed the agents were obviously carrying reins for their horses. Instead, she pointed to “reports” and “the inappropriate use of what appear to be whips.”

Even Biden’s Secretary of the Department of Homeland Security condemned the agents, even though he almost certainly understood it to be a lie. He told the House Homeland Security Committee that the images were “correctly and necessarily were met with our nation’s horror” and that “they do not reflect who we are as a country, nor do we think they reflect who the United States custom border protection is.”

The DHS also immediately stopped using horses in the Rio Grand Valley because liberal journalists couldn’t tell the difference between reins and whips. On learning that his photo was being used to spread a lie, the original photographer, Paul Ratje, told local news outlets, “I’ve never seen them whip anyone. He was swinging it…but it can be misconstrued when you’re looking at the picture.”

The most outrageous statements about the easily debunked photos came from the president himself. During a press conference, and before there was any investigation, Joe Biden told the press, “I promise you those people will pay. There will be consequences … It’s dangerous, it’s wrong. It sends the wrong message around the world, it sends the wrong message at home. It’s simply not who we are.” The facts of the case did not matter to the administration. What only matters is the retweets and fueling of the leftwing rage machine that does.

Biden has kept his word and cowered before his unhinged leftwing base that is incapable of admitting they were mistaken or fell for a hoax. Despite being completely cleared of the charges that they were whipping immigrants, Biden’s DHS has decided to trump up charges against the agents to punish them anyway.

Fox News is reporting the Department of Homeland Security is preparing to discipline “multiple” horseback Border Patrol agents involved in the infamous “whipping” incident of Haitian migrants at the U.S.-Mexico border back in September.

A federal source told Fox News an announcement on the matter is expected within the coming days.

The source said that DHS will be putting forth proposals to discipline the agents who will have a chance to respond to the charges. The charges, Fox News is told, are “administrative violations,” and do not amount to criminal conduct – of which the agents were previously cleared.

Fox News also reported on a study indicating that “ABC, CBS and NBC pushed a since-debunked claim that Border Patrol agents were whipping Haitian migrants during a confrontation near the U.S.-Mexico border last year but didn’t bother to inform viewers that it was discredited.

The Media Research Center analyzed morning and evening newscasts on ABC, CBS and NBC and found that all three broadcast networks harped on the story when images emerged last September showing Border Patrol agents in Del Rio, Texas on horseback blocking migrants from entering the U.S. and, in one case, grabbing onto a migrant’s shirt.”

To make matters even more hypocritical, the Biden Administration has defend the border agents when forced to speak the truth in court. The Washington Free Beacon reports that the Biden administration recently filed a legal motion asking for the dismissal of a lawsuit claiming the United States illegally discriminated against the Haitian migrants.

The newspaper wrote, “Biden administration lawyers argue the agents did not treat the Haitians differently than any other group of immigrants. At the time, however, President Joe Biden and Vice President Kamala Harris condemned the agents—who were photographed trying to contain the migrants on horseback, with some images misconstrued by journalists to claim agents were using whips—for allegedly discriminating against the migrants.”

The agents and their union are not taking the punishments lying down. On Thursday, The National Police Association submitted “a Freedom of Information Act (FOIA) lawsuit against the U.S. Department of Homeland Security (DHS) & Customs and Border Protection (CBP) for communications and records pertaining to the allegations by the Biden Administration against mounted Border Patrol agents in the ‘Whipping’ incident.”

NPA spokesman retired Sgt. Betsy Brantner Smith said, “Recent media reports indicate the Administration is planning to charge the agents with ‘administrative violations’ to save face and prevent the need to admit the whipping accusations were false, defamatory, and unconscionable. We believe our lawsuit will result in DHS and CBP conforming to the law and handing over the communications and documents that prove the Administration knew their accusations against these agents were false and took no corrective action.”