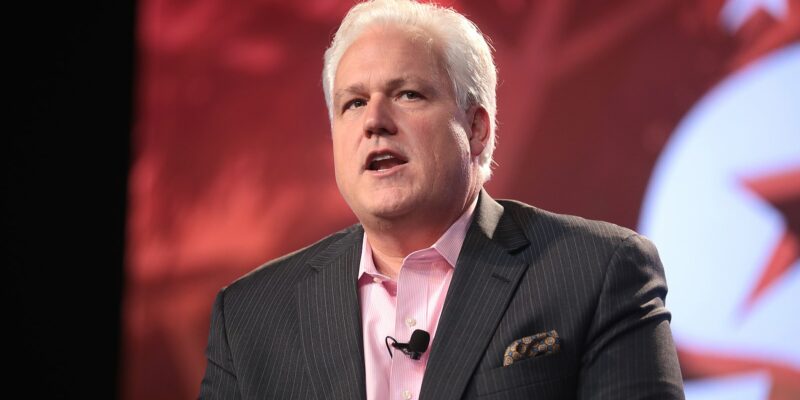 “Fat Matt.” That, according to NCP sources, was the nickname President George W. Bush gave Matt Schlapp while working on his staff in the White House. Since that time, Fat Matt has parlayed his time working for the president into fat paydays, working as a mega-corporate lobbyist while also grifting from conservative activists as head of the American Conservative Union, which hosts the annual CPAC, a conference attended by conservative activists and elected officials from across the country.

All that might be about to change. The Daily Beast is reporting that Schlapp has been accused by a staffer member of Herschel Walker’s failed Senate campaign of sexual misconduct.

The Daily Beast writes, “The staffer said the incident occurred the night of Oct. 19, when Schlapp, chair of the American Conservative Union and lead organizer for the influential Conservative Political Action Conference, “groped” and “fondled” his crotch in his car against his will after buying him drinks at two different bars.

The staffer described Schlapp, who had traveled to Georgia for a Walker campaign event, as inappropriately and repeatedly intruding into his personal space at the bars. He said he was also keenly aware of his “power dynamic” with Schlapp, widely regarded as one of the most influential figures in national conservative politics.

The staffer, in his late thirties, recalled that while he drove Schlapp back to the hotel, Schlapp put his hand on his leg, then reached over and “fondled” his crotch at length while he was frozen in shock, calling it “scarring” and “humiliating.” When they arrived at the hotel, the staffer said Schlapp invited him to his room. The staffer said he declined and left “as quickly as I could.”

He informed the campaign about the incident the next morning.

NBC said, “Schlapp, who drank Tito’s vodka during the night, began “intruding into my personal space” at the second bar, the staffer said. At one point, Schlapp bumped into the staffer’s gun while their legs touched, the staffer said, prompting Schlapp to ask what he was carrying.

“Sig Sauer,” the aide said, surprised to find that Schlapp seemed unfamiliar with the name of the gun given CPAC’s emphasis on Second Amendment rights. Schlapp, who grew up in Wichita, a sizable city in Kansas, explained that he didn’t have a background with firearms, the staffer said.”

“In videos he recorded right after the incident, which he shared with The Daily Beast as well as his wife and another person close to him, the staffer said Schalpp “put his hands on me in a sustained and unsolicited and unwanted manner,” and “grabbed my junk and pummeled it at length,” adding that the incident left him feeling “so f–king dirty.” He said he informed the Walker campaign the next morning, and felt “nothing but support” from campaign officials.

The staffer said he declined to take legal action disclose the incident earlier because he was concerned it would have personal and professional repercussions and add to the mounting scrutiny of Walker’s ultimately unsuccessful Senate bid, according to The Week.”

A senior official from the Walker campaign affirmed that the aide had made the allegations with his supervisors and the alleged victim has praised the campaign’s response to the incident.

The Advocate noted, “While CPAC has been criticized for hosting anti-LGBTQ+ speakers, Schlapp has welcomed LGBTQ+ conservatives to attend.” Matt Schlapp is married to Mercedes Schlapp, the latter served in the Trump White House.

Citizens for Ethics described how the Schlapp family likely monetized the White House. “According to lobbying disclosure reports covering the final quarter of 2018 that were recently filed by Schlapp’s lobbying firm, Cove Strategies, he is listed on five accounts that involved contacting the Executive Office of the President (EOP). For one of the clients, Ligado Networks, Schlapp is the only listed lobbyist and EOP is the only government agency listed as a point of contact.

Though Schlapp has been registered to lobby under the Cove Strategies banner since 2009, it was only recently that he was listed on Cove lobbying reports involving White House contacts. In fact, Schlapp, who had lobbied the Bush White House for Koch Industries, was never listed on any Cove lobbying reports listing EOP contacts until the fourth quarter of 2017, which happens to be the first full quarter in which his wife, Mercedes Schlapp, was working in the Trump White House.”

Schapp’s lobbying firm “was hired by 16 clients in 2020, for a total amount of $2,420,000.” Axios reported that the same firm “brought in $750,000 in the final two weeks of 2020 from a former top Trump fundraiser and convicted fraudster who retained Schlapp to lobby — unsuccessfully — for a presidential pardon.”

Unsurprisingly, The Beefed Up IRS Is Still Going After Regular Americans Rather Than ‘The Super Rich’