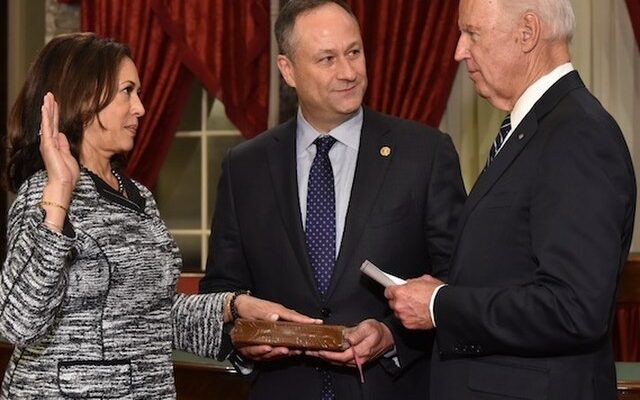 According to a new book, Joe Biden finds Vice President Kamala Harris and her husband, Doug Emhoff, to be annoying. In a way, this makes Biden much more relatable to the rest of us. A recent poll showed that 55 percent of the public disapproves of Harris’s ability to handle her job.

Unlike most of us, however, what has annoyed the president is that she complains that her job isn’t easy enough while most of us think her incompetence is the problem.

Politico reported last month that efforts by Harris’s husband to box out the vice president’s potential future rivals prompted “eye-rolling” inside the White House. During the Democratic nominating contest for 2020, Harris’s presidential campaign ran aground amid infighting between top advisers.

Harris’s handling of her portfolio assignments has prompted questions inside the White House. Like Harris, Biden took the lead on foreign policy in the Central American region as vice president in the Obama administration amid a migration crisis.

Biden tasked Harris early on in his administration with overseeing efforts to slow the tide of immigrants arriving at the U.S.-Mexico border, a politically fraught assignment that saw an aide to the vice president quickly push back against the idea that she would be “doing the border.”

“Those jobs included deterring illegal immigration at the US-Mexico border and pushing Congress to pass a sweeping election reform and voting rights law.

‘Biden was annoyed,’ the book says. ‘He hadn’t asked Harris to do anything he hadn’t done as vice president — and she’d begged him for the voting rights assignment.’

The passage suggests that Biden’s outburst took place sometime after June 2021, when he publicly assigned Harris the voting rights initiative — which flopped in Congress,” according to The New York Post.

Biden isn’t the only one in the administration who thinks the Harris camp is off base in their whining. Politico wrote, “A senior White House adviser vented that ‘[Harris’] inner circle didn’t serve her well in the presidential campaign — and they are ill-serving her now.’

The new details of the tensions between the vice president and the president are among the many revelations in the book due out on Jan. 17 that traces the highs and lows of Biden’s first two years.”

Harris and President Biden have had a bit of a rough relationship since the 2020 primaries. That’s when the future vice president called the man who’d eventually offer her the second slot on the presidential ticket a racist.

In March, The Hill wondered if Harris should be considered the worst vice president of all time. She was put “in charge of addressing the crisis at the southern border, which has grown exponentially worse since she took on that responsibility. And Biden occasionally sends her off to make speeches. But that’s turned out to be even worse than her handling of the border crisis — because a vice president’s only real job is to not embarrass the president and the administration. That’s something Biden is able to do, and often does, without any help from Harris.

In many ways, Harris’s tenure has resembled the television show Veep. Social media has had a field day compiling her word-salad speeches and making them available for everyone to snicker at. And that tendency will likely only get worse with the ‘passage of time,’ because ‘there is great significance to the passage of time,’ as Harris is fond of saying.”

Now that it looks like Joe will be running for re-election in 2024, the talk of replacing Harris at the VP slot has only grown. The liberal magazine Slate wrote, for example, “When Kamala Harris launched her bid for the Democratic presidential nomination in 2019, she was considered one of the party’s brightest rising stars. An early frontrunner, she was a young, highly accomplished, relatively charismatic Black woman in a party built on Black women’s support. She had built name recognition by devouring conservatives in viral moments at Senate hearings. Her actual politics were hard to pin down (a former prosecutor running on criminal justice reform?), but that might have worked in her favor if she’d run a strong campaign down the middle.

Instead, Harris’s presidential campaign will be remembered as one of the worst of that election cycle. Internally, it was a disastrously mismanaged mess. Externally, it offered a series of mixed messages, short-lived slogans, and attempts to backpedal along the ideological spectrum. Her dazzling presence in planned speeches and gotcha moments flickered out when she was forced to think—and relay a coherent policy position—on her feet. It was a spectacular letdown that contained a lesson about electoral politics: candidates who looks promising on paper can easily flounder under pressure.

As Joe Biden weighs a run for re-election even as he becomes the first octogenarian U.S. president in history, he should think back on what it was like to watch the Harris campaign flame out. A second Biden term would mean even higher stakes for a vice-presidential pick—not only because Biden is older than he was the first time around, but because the VP serving when he leaves could be the de facto frontrunner in the 2024 Democratic primary. Harris, a proven dud of a presidential candidate who has done little to distinguish herself since, is not a good choice for the Democrats’ top billing. For his second term, should he seek one (he shouldn’t!), Biden should tap someone else.”

While that might be a good choice for Biden, it would be less entertaining (or appalling) as she laughs at every inopportune possible.