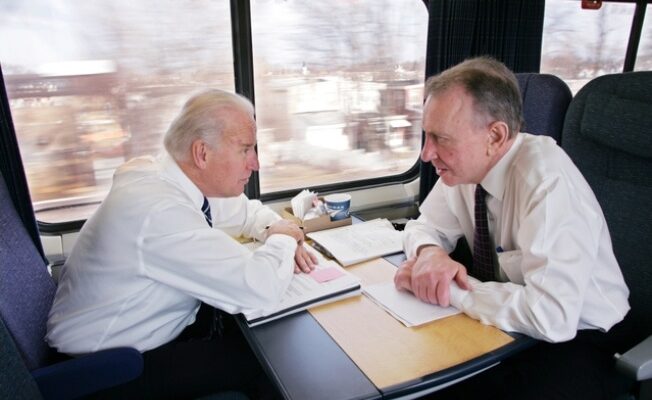 [Executive Office of the President of the United States, Public domain, via Wikimedia Commons}

In September, as the White House saw its wheels fall off over inflation and grasping straws wherever they could find them, it announced a “breakthrough” in negotiations between union workers and rail companies. At the time, The New York Times wrote, “It followed all-night talks between unions and industry leaders that were brokered by Mr. Biden’s labor secretary, Martin J. Walsh. Mr. Biden called in to the discussions around 9 p.m. Wednesday, a person familiar with the talks said.”

Biden argued that the agreement would “benefit both workers and companies alike, reflecting his effort this week to remain impartial in the talks as he tried to push the sides toward agreement. While Mr. Biden has styled himself as the most pro-union president in history, he avoided publicly taking sides in a fight that carried huge economic and political risks, portraying the tentative deal as an achievement for both unions and corporations.

‘This agreement is a big win for America,’ Mr. Biden said. ‘And this is a great deal for both sides, in my view’” and Democrats breathed a sigh of relief as another debacle from the Administration was avoided on the brink of the midterms.

Now that America has voted and Democrats have been saved from their own incompetence, we are now learning that the nation’s largest rail union did not have enough support from its members to approve Biden’s fake deal and has rejected it.

Remember the rail strike that Biden supposedly averted right before the midterms?
It’s BACK ON! A key freight rail union just rejected the latest deal.

CNN reports, The nation’s second-largest rail union, which represents engineers, ratified its own contract. But the failure of the conductors to ratify their own deal is another setback to efforts to avoid a crippling nationwide rail strike.

The two unions are the transportation division of the Sheet Metal, Air, Rail, Transportation union (SMART-TD), which represents about 28,000 conductors and the Brotherhood of Locomotive Engineers and Trainmen (BLET), which represents about 24,000 engineers. The engineers and conductors make up the two-person train crews. Both unions reached tentative deals in September in a marathon 20-hour negotiating session just hours before their earlier strike deadlines.

If the unions are unable to reach new deals before strike deadlines, Congress could order the railroad workers to remain on the job or return to work.

Congress is already facing calls from a wide range of business groups to act to prevent a strike. About 30% of the nation’s freight moves by rail, when measured by the weight of the freight and the distance it travels. A strike therefore could cause widespread disruptions in the nation’s still struggling supply chain and overall economy. If the strike goes on for an extended period, it could cause widespread shortages and higher prices for goods including fuel and food.

We might not get food or fuel for the holiday season, but at least the White House delayed the rejection long enough to ram judges through the Senate for two years.

“Train conductors represented by the Sheet Metal, Air, Rail and Transportation Workers-Transportation Division, or SMART-TD, narrowly rejected the proposed deal. The vote drew record turnout among the union’s membership of more than 28,000 conductors and other workers,” according to the New York Post.

“SMART-TD members with their votes have spoken, it’s now back to the bargaining table for our operating craft members,” SMART-TD President Jeremy Ferguson said in a statement on the decision. “This can all be settled through negotiations and without a strike. A settlement would be in the best interests of the workers, the railroads, shippers and the American people.”

“The ball is now in the railroads’ court. Let’s see what they do. They can settle this at the bargaining table,” Ferguson added. “But, the railroad executives who constantly complain about government interference and regularly bad-mouth regulators and Congress now want Congress to do the bargaining for them.”

The Washington Post notes that a strike will really hurt ordinary Americans, “A national rail strike, which could happen as early as Dec. 5, would threaten the nation’s coal shipments and its supply of drinking water, while shutting down passenger rail and shipment of goods as the holiday season revs up. The U.S. economy could lose $2 billion a day if railroad workers strike, according to the Association of American Railroads.

The move highlights months of tension between unions and companies across a variety of sectors, as companies have been dealing with labor shortages and workers have taken advantage of more leverage in the workplace to press for better working conditions, more sick pay and more flexible schedules in the aftermath of the pandemic.

The rejection of the contract adds new pressure to the White House, which had been closely involved in negotiating the contract between the unions and rail companies. A shutdown of the nation’s transportation infrastructure heading into the holiday season would spell a political disaster.”

ABC explained, “Rail is critical to the entire goods side of the economy, including agriculture, manufacturing, retail and warehousing. Freight railroads are responsible for transporting 40% of the nation’s long-haul freight and a work stoppage could endanger those shipments.”

“A rail strike would cause $2 billion in damage a day for the U.S. economy,” NRF VP for Supply Chain & Customs Policy Jonathan Gold says, adding that the damage would be “significant.” pic.twitter.com/keDn9PaSb1

Joe Biden loves trains as much as he loves ice cream. In 2020, WaPo wrote about his “love affair with Amtrak,” detailing how “Biden launched his 1988 presidential bid from the back of a train. Two decades later, he promised that Barack Obama would preside over the “most train-friendly administration ever.” In 2009, Biden rode with Obama to Washington aboard a triumphant inaugural special. In 2017, he slipped out of town on Acela an hour after President Trump took the oath of office.

Biden estimates he has ridden over 2 million miles aboard 16,000 Amtrak trains.”