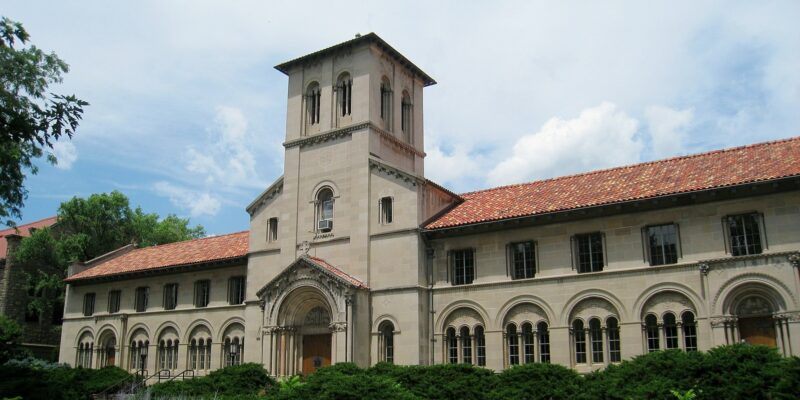 Established in 1833, Oberlin was one of the country’s first institutions of higher education to admit African American students and one of the nation’s first colleges to have coeducational classes. It was once a stop on the Underground Railroad.

As George Will once quipped, Oberlin “has, however, long since become a byword for academic self-caricature, where students protest, among many microaggressions, the food service’s insensitive cultural appropriation of banh mi sandwiches, sushi and General Tso’s chicken.”

Now that hyper-wokeness has cost the college tens of millions of dollars.

The New York Times reported, that Oberlin College, known as a bastion of progressive politics, said on Thursday that it would pay $36.59 million to a local bakery that said it had been defamed and falsely accused of racism after a worker caught a Black student shoplifting.

That 2016 dispute with Gibson’s Bakery resulted in a yearslong legal fight and resonated beyond the small college town in Ohio, turning into a bitter national debate over criminal justice, race, free speech and whether the college had failed to hold students to account.

The decision by the college’s board of trustees, announced Thursday, came nine days after the Ohio Supreme Court had declined to hear the college’s appeal of a lower-court ruling.

“Truth matters,” Lee E. Plakas, the lawyer for the Gibson family, said in an email Thursday. “David, supported by a principled community, can still beat Goliath.”

While The Times may be trying to put a positive spin on the payment by saying that the college “said it would pay,” a better, more apt description is that a court is ordering Oberlin College to pay a judgment for defaming a local, beloved bakery in its town of Oberlin, Ohio after its administrators tried to extort them into allowing shoplifting by college students.

The far-left college’s statement read: “Oberlin College and Conservatory has initiated payment in full of the $36.59 million judgment in the Gibson’s Bakery case and is awaiting payment information from the plaintiffs. This amount represents awarded damages and accumulated interest, and therefore no further payments are required.

On August 30, the Ohio Supreme Court issued its decision not to hear Oberlin’s appeal. Oberlin’s Board of Trustees has decided not to pursue the matter further.

We are disappointed by the Court’s decision. However, this does not diminish our respect for the law and the integrity of our legal system.

This matter has been painful for everyone. We hope that the end of the litigation will begin the healing of our entire community.”

Back to Will, who described what happened as only he can. “In November 2016, a clerk in Gibson’s Bakery, having seen a black Oberlin student shoplifting bottles of wine, pursued the thief. The thief and two female friends were, according to the police report, kicking and punching the clerk on the ground when the police arrived. Some social-justice warriors — they evidently cut class the day critical thinking was taught, if it is taught at Oberlin — instantly accused the bakery of racially profiling the shoplifter, an accusation complicated by the fact that the shoplifter and his partners in assault pleaded guilty.

The warriors mounted a protracted campaign against the bakery’s reputation and solvency. But with the cowardice characteristic of bullies, Oberlin claimed in court that it had nothing to do with what its students did when they acted on the progressive righteousness that they imbibe at the school. However, at an anti-bakery protest, according to a complaint filed by the bakery, the dean of students helped distribute fliers, produced on college machines, urging a boycott because “this is a RACIST establishment with a LONG ACCOUNT of RACIAL PROFILING and DISCRIMINATION.” (There is no record of any such complaints against the bakery, from which Oberlin bought goods until the hysteria began.) According to court documents, the administration purchased pizza for the protesters and authorized the use of student funds to buy gloves for protesters. The college also signaled support for the protests by suspending college purchases from the bakery for two months.

A jury in the defamation trial awarded the bakery $11 million from Oberlin, and $33 million more in punitive damages. The $44 million probably will be reduced because, under Ohio law, punitive damages cannot exceed double the amount of compensatory damages. The combination of malice and mendacity precluded a free-speech defense , and the jury accepted the obvious: The college’s supposed adults were complicit in this protracted smear. Such complicity is a familiar phenomenon.”

The Lowell Sun noted that there were 40 adults arrested for shoplifting in five years at the store. Thirty-two of them were white. Furthermore, Trey James, “a Gibson’s employee who is himself black, bluntly told the student newspaper that race had nothing to do with the incident. ‘If you’re caught shoplifting, you’re going to end up getting arrested,’ he told the Oberlin Review. ‘When you steal from the store, it doesn’t matter what color you are. You can be purple, blue, green, if you steal, you get caught, you get arrested.'”

Oberlin administrators were so out of touch with reality that during a meeting with Gibson’s, they said they would think about reinstating their business relationship if the bakery consented to bring no criminal charges against first-time shoplifters.

After the bakery owners explained that such a policy would lead to more shoplifting, Oberlin offered a completely insane request to local businesses: they should “agree to call the school and not police if students were caught shoplifting in their stores in the future. The school would give each student a ‘free pass’ for their first theft.”

Deep in Ohio, the lunatics have taken over the asylum. A former administrator told the Washington Examiner that Oberlin’s recent decline in enrollment had caused the college to be afraid of crossing its wokest students. “A freshman from an East Coast big city might come to Oberlin and find there is little for a social justice warrior to do in a small town like this, so they get frustrated and make issues like this shoplifting thing bigger than it should be, and the school follows along.”

One wonders if nearly $37 million dollars will be enough to shake the college’s leadership out of their stupor. Probably not. The college has almost a billion dollars in its endowment.

A new saying has arisen over the past few years in the wake of the growing wokeness of our corporations: if you go too woke, you will go broke. Oberlin looks like it wants to take that theory to the limit.