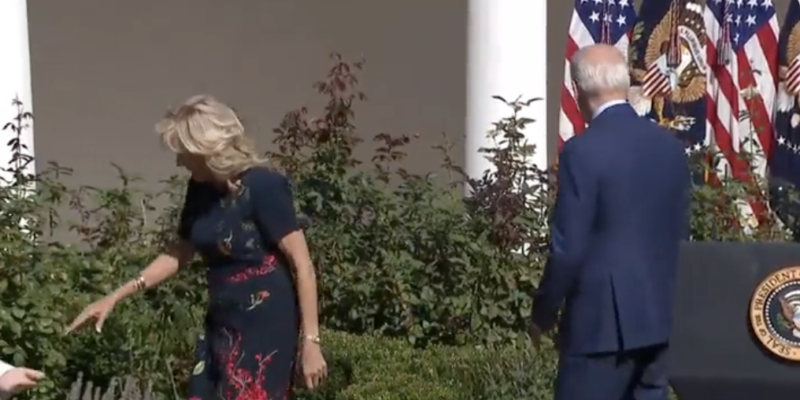 Update 9-29-22: After giving a speech at FEMA related to the ongoing hurricane. President Biden wandered away from the podium to staffers asking him to come back.

There’s a new theory about why President Joe Biden waited so long to call Florida Governor Ron DeSantis as a massive hurricane bears down on the Sunshine State: Maybe he just forgot?

Wednesday morning Joe Biden had what has been euphemized as a “senior moment” by the media, an embarrassing display that either showed a complete lack of decorum and empathy or demonstrated a cognitive decline that Americans should find troubling.

The Washington Post reported, “President Biden promoted a goal to end hunger in the United States by 2030 as he delivered an address at the first White House conference on hunger since 1969, when President Richard M. Nixon pulled together a similar gathering. Biden said his administration is announcing $8 billion in public- and private-sector commitments to help reach the goal and said the push should be bipartisan and something for “the whole country to work on together.”

In his remarks at a White House hunger conference on Wednesday, President Biden seemed to search the audience for former congresswoman Jackie Walorski (R-Ind.), who died in a car crash in early August.”

Rep. Walorski (R-IN) died in a car crash in Elkhart County, Indiana in August, along with three others. Walorski and two passengers were driving southbound on state Route 19, when a vehicle veering left into oncoming traffic crashed into their car, The sole occupant of the second vehicle was identified as 56-year-old Edith Schmucker of Nappanee, Indiana.

All four were announced dead on the scene. After Walorski’s death, Biden released a statement commemorating the Indiana politician, writing: “Jill and I are shocked and saddened by the death of Congresswoman Jackie Walorski of Indiana along with two members of her staff in a car accident today in Indiana.”

"Jackie are you here? Where's Jackie?"

Although a tribute to Walorski was scheduled to play at the event, it was not shown while President Biden or the White House reporters were in attendance.

The White House did itself no favors trying to cover for the president that afternoon. “At an afternoon briefing,” NPR stated, “White House press secretary Karine Jean-Pierre did not acknowledge that Biden had misspoken. Jean-Pierre told reporters, many of whom pressed her to elaborate, that Walorski had been top of mind for Biden as he named the hunger conference’s congressional champions. And the president, she said, will be honoring Walorski on Friday with a signing of a bill to rename a VA clinic in Indiana after her. ‘That is what he was thinking of. He was thinking about her,’ Jean-Pierre said.”

When asked, “If Walorski was at the top of his mind, why was he looking for her?” Jean-Pierre responded bizarrely, “I don’t think it’s all that unusual.”

Reporter: "If Walorski was at the top of his mind, why was he looking for her?"

Jean-Pierre: "I don't think it's all that unusual." pic.twitter.com/VaKBQ4GnYR

This wasn’t the only recent “senior moment” for the president of the United States. Earlier in the month, he was confused about where he was supposed to go before being directed by First Lady Jill Biden to move from the stage.

NOW – Jill to Joe Biden: "You go down this way."pic.twitter.com/oOlys2oLW4

Biden was also recently mocked across social media platforms for appearing bewildered and asking a blind person where he was.

However, the most embarrassing thing to happen might be that Biden decided to maintain his schedule as a catastrophic hurricane hit Florida.

Jean-Pierre responded that the team didn’t have ‘any changes in his schedule.”‘

Q: Is it still Biden’s intent to attend a political fundraiser tonight while a hurricane hits Florida?

Jean-Pierre: “We don’t have any changes in his schedule.” pic.twitter.com/uU20gWwMTI

At some point, you have to ask: how often does Joe Biden even remember he’s president?

[Read More: Biden Shamed Into Doing His Job, Sort of]