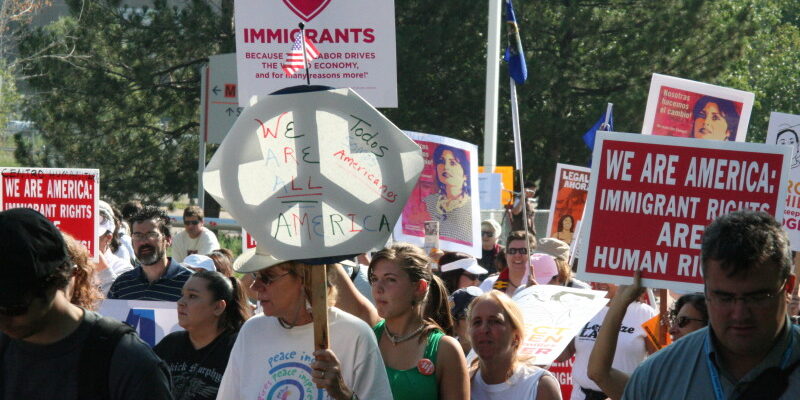 According to new data, the United States has seen a ten percent surge in the undocumented immigrant population since the inauguration of President Joe Biden and the implementation of his open borders policies. The Census Bureau and the Bureau of Labor Statistics indicate that the population grew from 10.2 million in January 2021 to 11.6 million this past April. The foreign-born population in America, which includes legal and illegal immigrants, is now 47 million, or 14.3% of the total population, the highest since the 1890s.

The Washington Examiner analyzed the impact of Biden’s policies on illegal immigration to the United States. “Since coming to office, the Biden administration has aggressively dismantled former President Donald Trump’s programs to curb illegal and legal immigration by opening the borders, stopping the construction of a border wall, and raising limits on refugees and other curbs on migration.

The result has been a massive and historic surge of illegal immigrants into the U.S., overwhelming border facilities and angering border-state officials and citizens.

“What’s changed?” the report asked. “At least some of the dramatic increase in the foreign-born population corresponds to the large surge of illegal immigrants at the southern border. This dramatic increase in border encounters seems closely related to President Biden’s campaign promises that created the perception, well before he even took office, that he would curtail immigration enforcement.”

A 2017 Pew Study reported, “Most immigrants (77%) are in the country legally, while almost a quarter are unauthorized, according to new Pew Research Center estimates based on census data adjusted for undercount. In 2017, 45% were naturalized U.S. citizens.

Pew showed that our neighbor to the South, Mexico remains “the top origin country of the U.S. immigrant population. In 2018, roughly 11.2 million immigrants living in the U.S. were from there, accounting for 25% of all U.S. immigrants.” China, India, the Philippines, and El Salvador rounded out the top 5 origin countries.

Pew also showed that Central and South America, along with the Caribbean, make up nearly a quarter of immigrants to the United States. Europe, Canada and other North American regions made up an 8th or so if the foreign population, as did the Middle East and North Africa.

There has long been a debate over whether or not large-scale immigration is good for the country. Supporters argue that immigration helps boost our economy and fight inflation, while critics often point to increased crime and say it hurts the American worker.

In early 2020, President Trump issued a “public charge” order that overhauled “how the government evaluates whether an individual from another country, either already in the United States or seeking to come here, is ‘not likely to be a public charge’—that is, not likely to use public benefits such as food stamps or Medicaid, a requirement of many visa categories and green card applications.”

Biden rescinded the rule almost immediately upon becoming president in 2021. The administration said it was “Restoring Faith in Our Legal Immigration Systems and Strengthening Integration and Inclusion Efforts for New Americans.”

SCOTUS Hunting For Leaker Who Endgered Lives of Justices