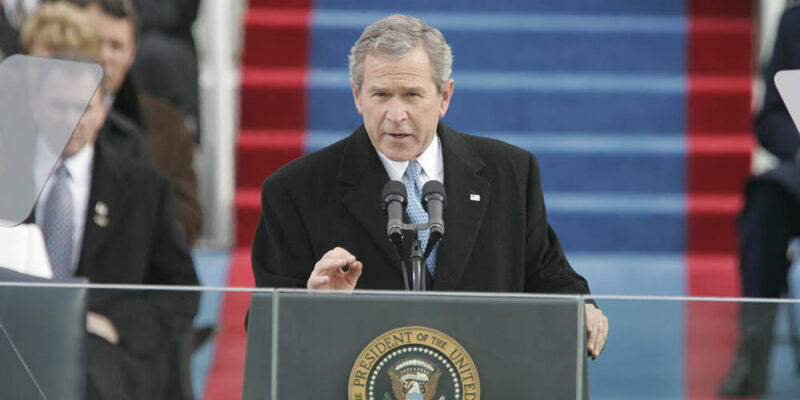 Law enforcement officials have arrested an Iraqi citizen residing in Ohio with a plot to assassinate former president George W. Bush. Living in Columbus, Shihab Ahmed Shihab Shihab was charged “with aiding and abetting a plot to assassinate” the 42nd president, “going so far as to conspire to smuggle undocumented immigrants into the United States to help carry out the killing.”

The New York Times reports that “Shihab was also accused of committing an immigration crime. The F.B.I.’s application for a warrant called Mr. Shihab a self-described “soldier waiting for directions from the leadership in Qatar.” And it alleges that he planned to provide material support to the Islamic State.”

The Department of Justice released a statement remarking, “Shihab allegedly intended to help who he thought was another Iraqi citizen enter the United States for a fee of $40,000. Shihab provided specific instructions on how he would smuggle the person into the United States after 60 days. In October and December 2021, Shihab accepted tens of thousands of dollars for the purported smuggling. In reality, the individual was fictitious, and the interaction was coordinated under the direction of the FBI.

In furtherance of the assassination plot, Shihab allegedly traveled to Dallas in February 2022 to conduct surveillance of locations associated with the former President. In March 2022, it is alleged Shihab met with others in a hotel room in Columbus, Ohio, to look at sample firearms and law enforcement uniforms.

The ISIS operative went to Texas last year to film Bush’s house in Dallas as he prepared to kill President Bush. NBC News described the plot in detail. “Shihab allegedly told a confidential FBI source that two of the potential members of the plot were ex-Iraqi intelligence agents. One of the Iraqi nationals was the secretary of an ISIS financial minister.” The alleged assassin schemed to funnel money to the plot through a car dealership.

NBC continued: “Shihab at one point thought he was smuggling someone into the country and allegedly received tens of thousands of dollars for it.” The Justice Department, for their part, said the person in question wasn’t real and that the FBI coordinated the ruse to out the suspect before he tried to kill the former president.

The FBI also worked with Customs and Border Protection “to gather telephone information, perform trap-and-trace analyses of phone calls, and conduct physical surveillance, all while having multiple confidential sources engage with the suspect, including one who has been working with the FBI for over 10 years.”

George W. Bush’s current chief of staff, Freddie Ford, let the public know W’s response to all this: “President Bush has all the confidence in the world in the United States Secret Service and our law enforcement and intelligence communities.”

The Wealthy’s Plan For The Rest of Us