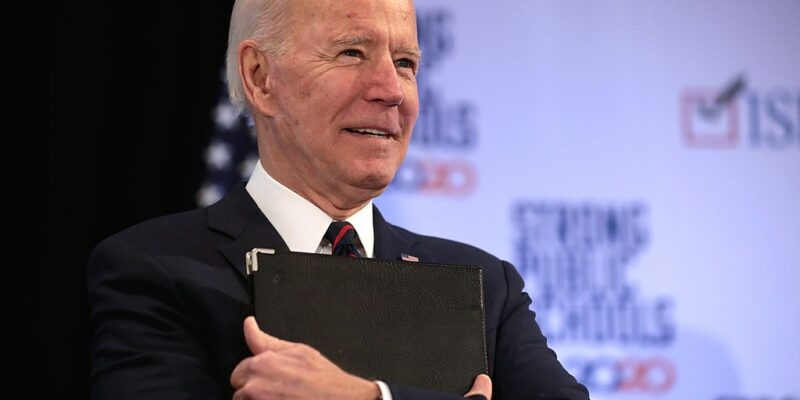 Update: An eagle-eyed Twitter user has noticed that liberals have been re-writing the “recession” category of Wikipedia to match the White House’s talking points. He notes, “There have been 38 edits to the “recession” page on Wikipedia in the last 3 days attempting to change the definition of recession.”

Historian Phil Magness has documented that Facebook is working as a censor to protect the Biden Administration as well. He wrote, “We live in an Orwellian hell-scape. Facebook is now ‘fact checking’ anyone who questions the White House’s word-games about the definition of a recession.”

Politico reports that “the White House is scrambling behind the scenes and in public to get ahead of a potentially brutal economic punch to the face that could give Republicans the chance to declare that the ‘Biden recession’ is under way….Senior administration officials are hitting the airwaves and arm-twisting reporters in private, imploring anyone who will listen that the economy — despised by majorities of both Republicans and Democrats fed up with inflation — is still healthy.”

Meanwhile, back in reality, Americans are hurting. A recent survey by CNBC showed that “58 percent of Americans are living paycheck to paycheck after the inflation spike — including 30% of those earning $250,000 or more.”

Things have gotten bad enough with the economy that the White House is now trying to change the commonly-understood definitions of words in order to try and save themselves. The administration representatives have begun pushing the idea that a recession, commonly defined as two consecutive quarters of negative economic growth, is actually not “technically” defined by that.

This, I guess, is a better tactic than what White House Director of the National Economic Council Brian Deese said, which is that we’re doing alright because we’re not having a famine like other countries.

Still, redefining things that everyone already understands reveals a sad state of affairs at 1600 Pennsylvania Ave.

Fox News explains: Economic data to be revealed on Thursday may show two consecutive quarters of negative gross domestic product (GDP) growth, which has long been the measure that determines whether the U.S. is in a recession. However, there’s been a major push by the White House to preemptively declare that even if the U.S. economy has shrunk in two consecutive quarters, that doesn’t necessarily mean the economy is in a recession.

Jared Bernstein of the White House Council of Economic Advisers insisted that neither President Biden nor the White House was going to “sugarcoat” the incoming GDP numbers, telling CNN on Saturday that only the National Bureau of Economic Research’s Business Cycle Dating Committee can determine whether the U.S. economy is in a recession.

Treasury Secretary Janet Yellen asserted on Sunday that two quarters of negative GDP growth is not the “technical definition” of a recession despite acknowledging that it is the “common” definition, defining it on NBC as a “broad-based contraction in the economy” based on a wide range of data.

White House Director of the National Economic Council Brian Deese echoed Yellen in citing the so-called “technical definition” of a recession, which he said on CNN involves a “much broader spectrum of data points,” and dismissed having “technical debates about backward-looking data.” White House adviser Gene Sperling also pushed similar talking points during his appearance on Fox News’ “The Story,” suggesting on Monday that the “jobs market” plays a significant role in what actually contributes to a recession.

Americans for Tax Reform President Grover Norquist blasted the Biden White House on “Mornings with Maria” earlier this week, calling it “sad” that the White House has to “say ridiculous things” like trying to “have an argument with a dictionary” over the definition of what a recession is.

Oxford Languages, which Google uses in its search engine, defines a recession as “a period of temporary economic decline during which trade and industrial activity are reduced, generally identified by a fall in GDP in two successive quarters.” The publisher says it is “the world’s leading dictionary publisher, with over 150 years of experience creating and delivering authoritative dictionaries globally in more than 50 languages.”

The absurdity was mocked by none other than Conan O’Brien, who tweeted, “The White House now says it’s only a recession if you see a salamander wearing a top hat.”

As always, the media is ready to help, but they only look like fools. Former Enron advisor and current New York Times columnist Paul Krugman, for example, wrote, “There’s a pretty good chance the Bureau of Economic Analysis, which produces the numbers on gross domestic product and other macroeconomic data, will declare on Thursday, preliminarily, that real G.D.P. shrank in the second quarter of 2022. Since it has already announced that real G.D.P. shrank in the first quarter, there will be a lot of breathless commentary to the effect that we’re officially in a recession.

But we won’t be. That’s not how recessions are defined; more important, it’s not how they should be defined.” In 2016, Krugman predicted that the world would fall into a global recession with the election of Trump.

Washington Post opinion columnist Catherine Rampell went on CNN and turned herself into a pretzel as well. The website NewsBusters showed how foolish she looked, “As Cabrera asked Rampell about the nearing recession, Rampell was quick to make a false claim about the widely accepted definition: ‘A lot of people think, oh, if you have two consecutive quarters of GDP declines, that in and of itself is a recession. No, that’s not the definition.’

While that seemingly has the textbook definition of a recession for years, this blatant neglect for the definition comes at a convenient time in the Biden Administration. A recent blog published by NewsBusters cited a new White House document announcing the move from the language of ‘two consecutive quarters of GDP lowering;” thus, helping the administration.”

The site also detailed how the media spoke about recessions when there wasn’t a Democrat in office. They wrote, “But for years, journalists and experts alike have argued in favor of the definition which the Biden administration has just tried to undo: that at least two straight quarters of negative GDP growth means the country is in a recession. See the video below for proof.

Disciplining language is everything for much of the left. What’s most remarkable about their attempt to redefine the common understanding of “recession” is that it shows the White House thinks the economy is a communications problem, not a policy problem. They have no plan to fix this mess outside of trying to convince us the mess isn’t real.

Democrats are convinced that Americans will believe that paying high prices for gasoline, food, and other staple items is a problem that can be spoken away as if by a magic spell. That’s why they are spending so much time trying to get the public to focus on anything else.

But the American people aren’t buying it, and it’s destroying the Obama-Biden coalition that won the White House three times. A recent poll stated that only 19 percent of Hispanics approve of Biden’s conduct as president with 70 percent disapproving.”

“The poll results come as the Democratic Party scrambles to retain its Latino and Hispanic voters, formerly a reliably blue bloc that has shown signs of shifting loyalties toward the GOP, The National Review explained.

The magazine continued: “Increasingly, Hispanics are coming to believe that the Republican Party better represents their interests and more traditional religious views. Former president Trump made impressive inroads with Hispanics during his tenure, increasing his support among the group by about eight points from 2016 to 2020. The effect was most pronounced in Florida and Texas, surprising Democratic strategists who believed Trump’s restrictionist immigration policies and rhetoric would alienate him from Hispanics.”

Americans will head to the polls on November 2, 2022, to vote in the midterm elections, regardless of any definition changes to “recession,” “Democrats,” or even “throw the bums out.”

WEF Comes Up With Another Genius Plan: No One Should Own Cars (Except Them)