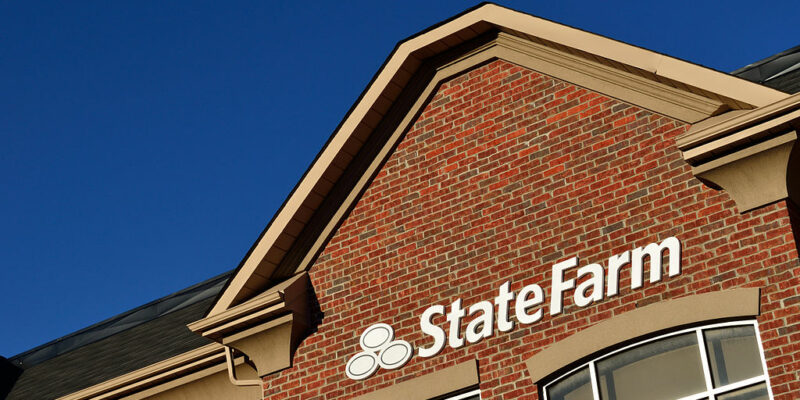 State Farm’s slogan is “Like a good neighbor, State Farm is there.” In this case State Farm might be the kind of neighbor that makes you put up a privacy fence or turn off the lights when you see them coming down the street. The insurance company has apparently been hocking books to kindergarteners promoting what Katie Couric has called “the gender revolution,” which is kind of like the French Revolution wherein radicals destroy things, obsess over language, and then complain life has gotten worse and more confusing from it. The advocacy group that discovered the program launched the website likeacreepyneighbor.com to garner attention to the fact that State Farm apparently wants to tell 5-year-olds that their body is oppressive.

American Greatness writes, “In January, State Farm Insurance actively advocated a company-wide program to get ‘Transgender, Inclusive and Non-Binary’ books into school libraries to spark ‘challenging, important and empowering conversations with children ages 5 and up. The company’s LGBTQ advocacy shifted dramatically on Monday, however: “Conversations about gender and identity should happen at home with parents, State Farm said in a statement after they were exposed by the independent non-profit organization Consumers’ Research.

On January 18, 2022, State Farm’s Corporate Responsibility Analyst Jose Soto sent out an internal email calling on its Florida agents to participate in a ‘unique project’ to ‘diversify’ classrooms, community centers and libraries.

In the email, Soto said State Farm had partnered with the GenderCool Project to get books about being transgender and non-binary in front of schoolkids as young as 5-years-old.

‘State Farm is partnering with The GenderCool Project to help diversify classroom, community center and library bookshelves with a collection of books to help bring clarity and understanding to the national conversation about Being Transgender, Inclusive and Non-Binary,’ the email reads. ‘The project’s goal is to increase representation of LGBTQ+ books and support our communities in having challenging, important and empowering conversations with children Age 5+.’

The company also said that approximately 550 State Farm agents and employees had the ability to push the three-book bundle on their local teachers, community centers or libraries. Chris Paul, Cliff Paul, Patrick Mahomes, and Aaron Rodgers were unavailable for comment. Nor was Jake, from State Farm.

The Examiner story got a swift response from State Farm, however. The insurance company has announced it is “discontinuing its support for the controversial GenderCool Project amid backlash following reports that the company was donating books about transgender issues, targeted at 5-year-olds, to schools .”

The insurer also released a statement: “State Farm’s support of a philanthropic program, GenderCool, has been the subject of news and customer inquiries,” the company said in a statement to the Washington Examiner late Monday. “This program that included books about gender identity was intended to promote inclusivity. Conversations about gender and identity should happen at home with parents. We don’t support required curriculum in schools on this topic. We support organizations providing resources for parents to have these conversations.”

Robert Frost once coined the phrase, “Good fences make good neighbors” in his 1914 poem “Mending Wall.” A century later, that might be worth thinking about next time you’re in the market for car or home insurance.

[Read More: Biden Wants WHO To Have Total Control On Health Emergencies]

Biden Wants WHO To Have Total Authority Over Health Crisis Declarations