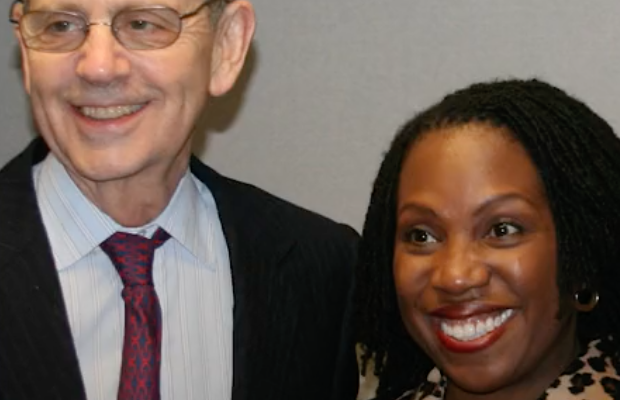 President Joe Biden made good on his promise to nominate the first Black female justice to the Supreme Court when he announced that Judge Ketanji Brown Jackson was his choice on Feb. 25, 2022. Jackson is currently a judge on the U.S. Court of Appeals for the D.C. Circuit, where she was one of President Biden’s first judicial nominees. We asked Alexis Karteron, director of the Constitutional Rights Clinic at Rutgers University Law School and a former senior attorney at the New York Civil Liberties Union, to give us her impressions of the nomination.

What were your first thoughts when you saw that President Biden had chosen Judge Ketanji Brown Jackson for nomination to the Supreme Court?

There are not that many Black women lawyers in the United States. We’re only about 2% of our profession. Having been in that position of being in a very small club of Black women who attend law school and become lawyers, I’m pretty excited to see one of us ascend to the very top of the profession and be nominated to join the Supreme Court.

Beyond that, I’m excited to see her nominated because I think she has a wealth of experience and a unique background professionally that I believe could only benefit the court’s decision-making. She’s the first person to be nominated to the court who has been a criminal defense attorney since Justice Thurgood Marshall was on the court, and he’s been off the court over 30 years now.

She is supremely qualified. She has not just an elite education – she went to Harvard for both college and law school – she clerked for the retiring justice whose place she will take, Stephen Breyer. Beyond that, she has been in private practice, she’s been on the U.S. Sentencing Commission and she’s been both a trial court and appellate judge. So she’s seen the profession from a variety of perspectives that will inform her decisions.

What would it mean to have a former public defender on the court?

I imagine it will help her understand the very real human toll of our criminal justice system. The U.S. is far and away the world’s largest jailer, with around 2 million people incarcerated in jails and prisons and 4 million more under criminal justice supervision like probation or parole. The criminal justice system takes an enormous toll on both people in the system and their loved ones. I believe having a Supreme Court justice who is familiar with that is incredibly valuable.

In addition, having represented people facing accusations from the government, she knows that the government does not always get things right. That may mean that she has a healthy skepticism of the government’s version of things, which is important for ensuring fairness in our judicial system.

She would join a court where she would be in the minority, philosophically, as is Justice Breyer. What does that mean for the court?

Her presence on the court will not necessarily swing the outcome of high-profile cases. But she’s also not Justice Breyer’s clone. I think having her voice on the court will certainly still be valuable, and again, she brings different life experiences to the bench that will inform her decision-making.

What notable rulings has Judge Jackson made?

There was one case during the Trump administration involving whether the White House counsel could be required to testify in the House of Representatives. One of the notable things that she said in that opinion was that “presidents are not kings.” She ruled that in our constitutional government, people have to abide by the rules, and the White House counsel could not be excused from complying with the House subpoena simply because the president didn’t want him to.

I’m teaching constitutional law right now, and this is a classic clash between Congress and the executive branch – a fight for control and how much Congress should be able to inquire into the president’s activities.
This is not a radical opinion that marks a major departure from precedent or other recent decisions.

She’s the first Black woman nominated to the Supreme Court. What might that mean for her jurisprudence?

I don’t think her being a Black woman necessarily tells us anything about how she’ll rule on a particular case. But we all know that judges bring their lived experiences to the bench. She has experienced the world in a way that is different from everyone else on the Supreme Court – even though she has plenty in common with other members on the court.

Research from the business world suggests that diverse groups make better decisions, in part because people challenge each other. They don’t necessarily have the same blind spots or see things the same way. I’m wondering how that will carry over to the Supreme Court.

Jackson would be one of the two youngest people on the court. Is that important?

I’ve heard justices say before that any time a new member joins the court, it’s a new court, that the dynamic shifts. From a generational perspective, there may be things that are important to her that are different than they were for Justice Breyer. I think having some youthful energy on the court can be useful – if it counts as youthful energy to have a 51-year-old added to the Supreme Court.

Maybe she has a more detailed or nuanced understanding of, say, social media, and how it operates. Maybe she has younger people in her life, who can inform her about those things and provide a different perspective than the members of the court who are a little bit older.

What are you going to say to your students about this appointment?

A new justice means there’s a new court, even if the ideological balance doesn’t necessarily shift. This is a really interesting time to watch the Supreme Court, because the majority on the court right now is willing to question things that seemed like they were settled for a long time. For example, although Roe v. Wade seemed to be settled law, we’re going to find out soon whether a majority of the court agrees.

Similarly, earlier this year, when the court barred implementation of OSHA’s COVID vaccine mandate for large businesses, it resurrected a doctrine that had been moribund for decades.

So I’m excited to see how her addition to the court will change things, both with the high profile blockbuster cases, and the ones that tend to fly under the radar.

This article is republished from The Conversation under a Creative Commons license. Read the original article.

What are false flag attacks – and could Russia make one work in the information age?